Please welcome our guest blogger, author Janet Wong! Chinese New Year 2016 is coming up on February 8th, so we asked Janet to share her Lunar New Year family traditions. If you want to learn more, Janet has listed resources including books, videos and links at the bottom.

Ice Cubes at the Door: A Survey of Lunar New Year Traditions

I grew up celebrating the lunar new year mainly with the Chinese traditions of my father and his parents—firecrackers at midnight, the Chinatown parade, red envelopes, eating fish for wealth and lo hon jai, the monk’s noodle dish made with 18 different vegetables, for health. What I remember most, though, was our whole family frantically cleaning the house the evening before, to get rid of all the dirt and bad luck of the past year and make room for good luck in the new year. This illustration by Yangsook Choi from our book This Next New Year perfectly captures the frenzy: 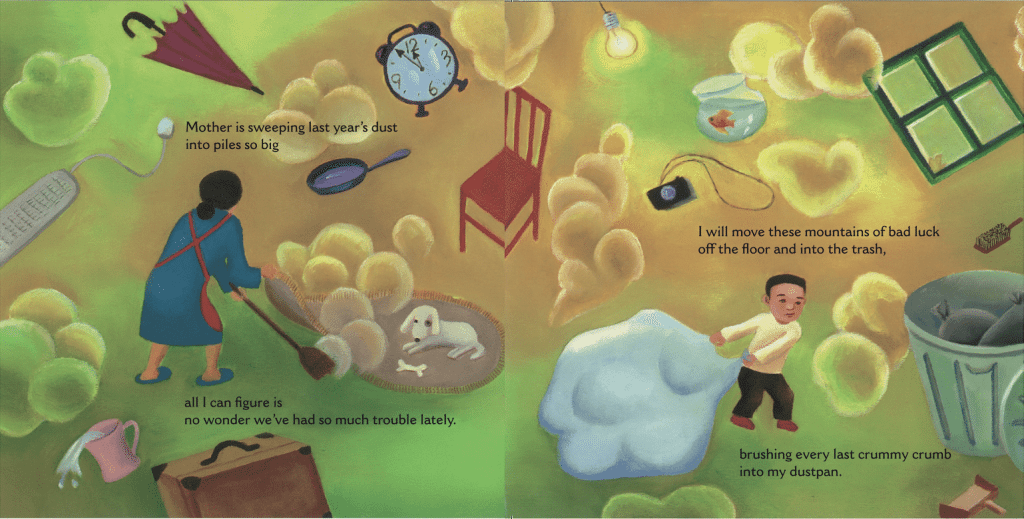 My mother is Korean so she cooked duk gook soup for us on New Year’s morning, a light broth with rice noodle disks in it. I didn’t know about other traditional celebrations from her childhood in a small village in Korea until I was an adult. I suspect she was withholding those traditions in part because she didn’t want me to beg for new clothes or to whine about wanting to go house-to-house on Lunar New Year, knocking on the doors of the elderly and bowing down for money. This poem by Linda Sue Park, from The Poetry Friday Anthology for Celebrations, shares the joy of that tradition minus the door-to-door aspect; done only with grandparents, it is a much more practical approach for the 21st century. 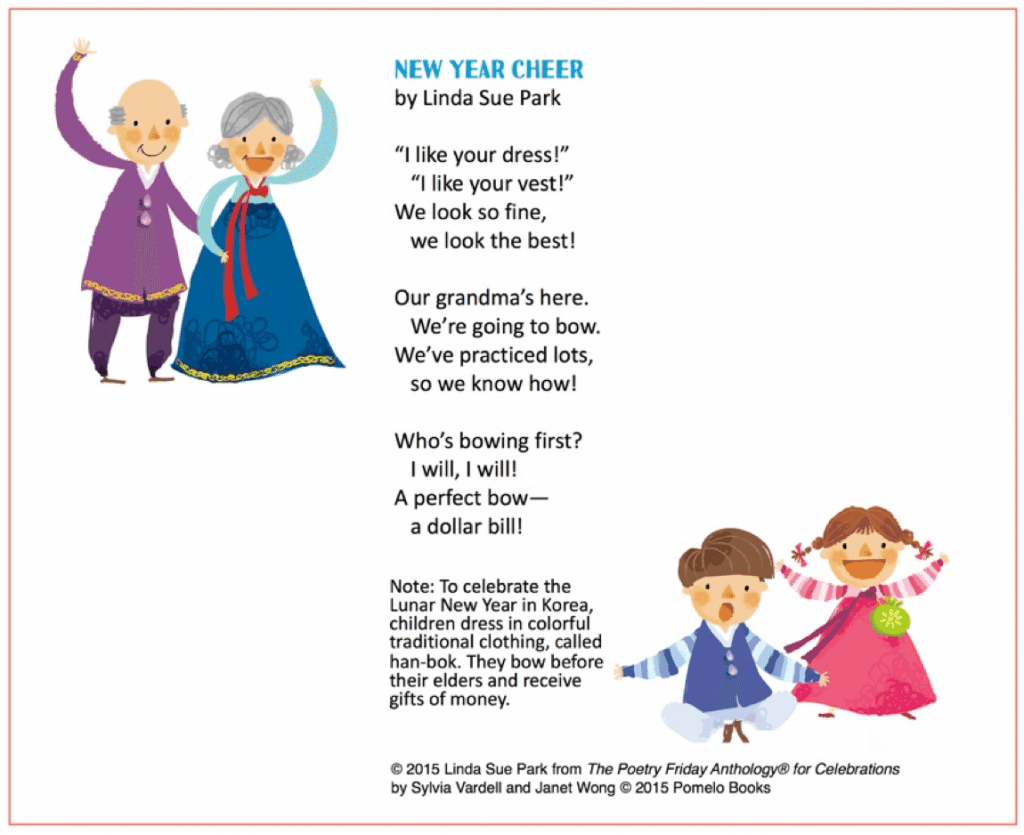 What little I know about Losar: On Tibetan Lunar New Year’s Eve, people drink a bowl of soup that contains a bread ball filled with chilies, salt, thread, wool, rice, coal, glass, or small prickly balls (yikes!). The contents of your dough ball are supposed to tell you something about yourself. I can picture this tradition as being a fun conversation starter at our house, as long as the dough ball contents—and our comments on them—were chosen very carefully. My mother would be thrilled, I’m sure, to find her favorite chilies in her dough ball; we’d just have to make sure no one mentions that chilies are supposedly an “unhappy object” indicating that you talk too much or have too sharp a tongue.

About Tsagaan Sar: The house is cleaned during the day on the Mongolian Lunar New Year’s Eve, and in the evening, families relax with a meal and card games. Winners know they’ll be lucky all year long. Three pieces of ice are placed outside the door so that the horse of the goddess Palden Lhamo can have a drink. The morning of Tsagaan Sar, a cup of milk tea is thrown in all directions. This reminds me a little of what my aunt, who grew up in Thailand, once told me about throwing water or baby powder during the Thai New Year, Songkran, in April (a tradition also observed during the Cambodian/Khmer New Year, Chaul Chnam Thmey, also in April).

The Vietnamese New Year, or Tết, celebration is very similar to Chinese New Year, with housecleaning and red envelopes. One element of the celebration that I love is the cây nêu, an artificial tree made with a bamboo pole. Families decorate the tree with red paper, good luck charms, bells, and origami fish and then place it in the front yard on the first day of Tết to protect the house. New year festivities come to a close at the end of the week when the tree is taken down.

What do these Lunar New Year celebrations have in common for those of us who live in parts of the world that consider January 1 the official new year? This: each year between mid-January and mid-February, the Lunar New Year appears just as we have failed to stick to our resolutions. The lunar new year forgives our lazy post-holiday daze and gives us a fresh start—another chance to make those resolutions happen.

We will enter the Year of the Monkey on February 8, 2016. Rise to the challenge! Inspire yourself, nudge your colleagues, and encourage your children to come up with some new goals. Think big! Here’s a “power poem” to help you reach, stretch, and STRIVE!

The Year of the Monkey
by Janet Wong

The Year of the Monkey
holds our goals so high

they might seem out of range.
It’s up to us to change

Time to bring our dreams
A-L-I-V-E! 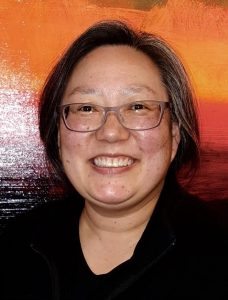 Janet Wong is the author of This Next New Year (illustrated by Yangsook Choi), available in three editions: an English-only edition, a Chinese bilingual edition, and a Korean bilingual edition. Wong lives in Princeton, NJ in a house that is going to be super-clean and ready for good luck to come pouring in on February 8th!

Books about the Lunar New Year:

This Next New Year by Janet Wong, illustrated by Yangsook Choi (2000, Farrar, Straus & Giroux; reprinted in its original English version plus Chinese bilingual and Korean bilingual versions in 2014)

These web resources will give you a start on your lunar new year celebration research: 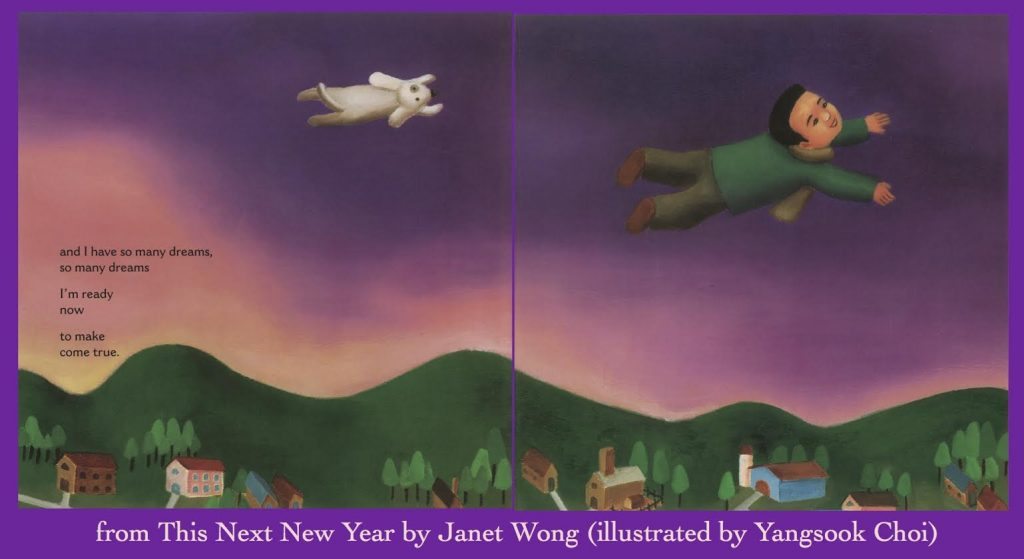 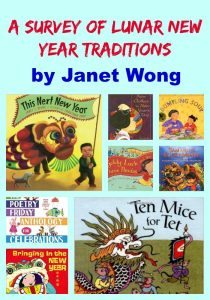