Guest post from Terri Birnbaum -co-founder of The RealGirls Revolution

Over the course of six years, and with the immense talent of many artists, and partnerships with some amazing organizations, a collection of illustrated girls became a 50-page coloring book we titled, RealGirls. Our story began when my daughter, Lydia, was eight, she and I were sewing clothes for her Barbies and had trouble making the dresses fit well on their tiny waists.

In frustration, I said, “Why don’t they just make real girls?” And with that, we began our long journey producing a book that celebrates girls’ unique and beautiful differences.

First, I reached out to community groups, student associations, art galleries, and college art programs, to meet with artists who were equally passionate about creating an alternative to the limited, and highly stereotyped, princesses and dolls that saturate our mainstream popular culture. Artists identified things they felt weren’t represented, and created girls that incorporated those qualities, or sketched friends or family members they felt embodied those qualities. They also used the opportunity to invest their artwork with visual messages addressing things that were important to them like, socioeconomic concerns, education, and cultural identity. One artist created a girl with a huge smile, understated clothing, and books in her arms, another created a girl wearing a traditional, culturally-specific scarf. These are just two examples of how artists chose to communicate pride in education and cultural identity.

As artists gave me their pencil sketches, I brought them to artist Randall Nelson and challenged him to develop a line art style that could accommodate all of the fine details needed to capture the subtle qualities each artist was embedding in their sketch. He transformed the sketches into an intricate line art style. Artists provided feedback, thoughts, concerns, and corrections until finally, they gave their approval of the artwork. Each RealGirl has taken many rounds of corrections and many months to complete. 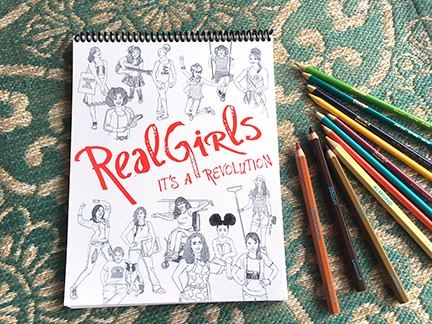 Along the way, we had the idea to reach out to organizations that support girls with physical differences, girls battling illnesses, and girls with learning challenges, to request permission to feature girls they recommended.

We were honored to have partnered with: Multiple Sclerosis Foundation, Lucky Fin Project, Helping Hands Foundation, National Down Syndrome Society, Axis Dance Company, and The Cleft Lip & Palate Foundation of Smiles. Through these partnerships, we’ve met some amazing girls who are breaking stereotypes and defying any and all limitations in their own way every day.

Finally, in December of 2017, I held the first copy of RealGirls in my hands. It was so rewarding. All of the hard work of so many people finally came to fruition.  Our mission to provide girls with images they can identify, to celebrate and empower girls, was finally ready to go out into the world.

We know it’s a lofty goal, but we hope to begin a self-confidence revolution, among girls everywhere.

Join us! Spread the word! Learn more about our mission here.

Mompreneur Terri Birnbaum’s, ForGood, is on a mission to provide girls with images they can identify with so that they might feel empowered to remain proud and confident. Terri’s tween-aged daughters, Evelyn and Lydia, felt there needed to be an alternative to representations of princesses and dolls, so they spent six years producing a coloring book that celebrates our differences

“Our book, RealGirls, is a 50-page illustrated coloring book created by many artists of diverse cultures and ethnicities working to fight stereotypes and generalizations by making visible what isn’t shown in our mainstream popular culture: the unique and beautiful qualities in the myriad girls that exist in reality.”

RealGirls is giving $100 each month to an organization that supports girls. Please help Terri and her RealGirls team by sending your suggestions to terri(at) realgirlsrevolution (dot) org. Each month we will list the charity and the person who suggested it on the RG website.

Terri and her daughters are honored to have partnered with Multiple Sclerosis Foundation, Helping Hands Foundation, National Down Syndrome Society, Lucky Fin Project, and The Cleft Lip & Palate Foundation of Smiles, to feature girls they recommended.