Author Kate Hannigan wants everyone to know about a FREE Diversity in KidLit event in Chicago coming up in January:

With the #WeNeedDiverseBooks campaign in full swing and the call for more diversity in children’s publishing louder than ever, it’s time to get more authors in the pipeline to publication. Here in Chicago, we try to connect aspiring authors with published ones through free events held throughout the year. And dovetailing with Multicultural Children’s Book Day on January 27th, we’ve organized what promises to be a lively panel discussion on January 23rd. 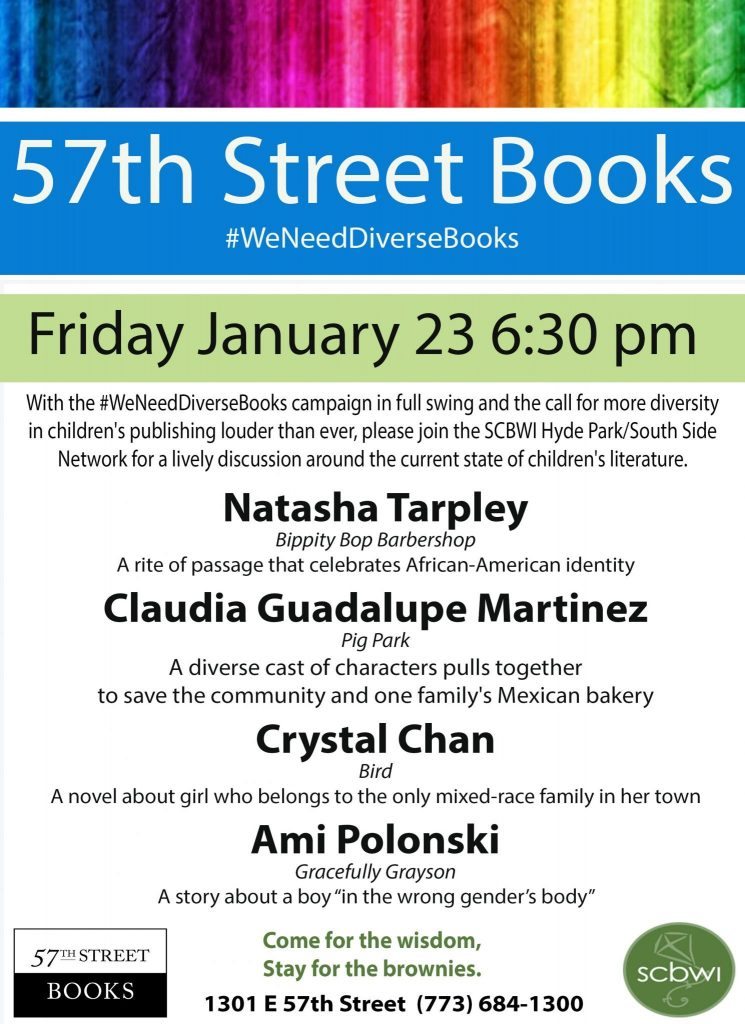 Through the national organization for children’s authors and illustrators known as SCBWI, we’re hosting four published authors to talk about the nuts and bolts of bringing their manuscripts to life. Natasha Tarpley, Claudia Guadalupe Martinez, Crystal Chan, and Ami Polonsky all live in the Chicago area and write books that feature characters who are underrepresented in today’s books for kids.

What we’re hoping to achieve through an event like this is to bring in aspiring authors who want to write about African American kids, Latino kids, Asian kids, feature mixed race or transgender characters in their books. We want writers of color to hear what the journey to publication was like – from other writers of color. We want everyone writing for young readers to be part of the dialogue around what’s happening in the children’s lit world, why the need for more diverse characters is so great, and why the volume is so high in the call for more diverse voices.

Natasha’s books Bippity Bop Barbershop and I Love My Hair (both from Little, Brown) and Joe-Joe’s First Flight (Knopf) all feature African-American children as central characters. She’s also the founder of Voonderbar! Productions, an independent publishing company that produces multicultural books for children of all ages. Check out what Natasha’s doing on her website.

Claudia is the author of the award-winning The Smell of Old Lady Perfume, which is set in a border town, and this year’s Pig Park, which features a diverse group of characters coming together to save a Chicago neighborhood. Both her books are from Cinco Puntos.

Crystal‘s Bird (Atheneum) tells the story of a girl who belongs to the only mixed-race family in her town and the tragedy that haunts them.

And Ami looks at gender roles in her debut Gracefully Grayson, about a boy “stuck in the wrong gender’s body.” It published earlier this year from Disney-Hyperion.

For readers, writers, and illustrators in the Chicago area who are devoted to children’s lit, we hope you’ll stop by and join the conversation.

Kate Hannigan is the founder of the Hyde Park/South Side Chicago Network of SCBWI . She is the author of the middle-grade series Cupcake Cousins from Disney-Hyperion, as well as the historical fiction for middle-graders The Detective’s Assistant (Little, Brown Books for Young Readers), which publishes in April. Visit her online at her website. 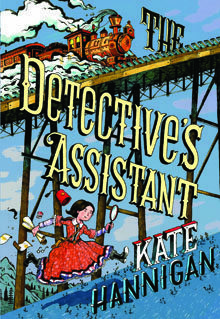