What happens when you get your wish?

That’s the question the students in my library inspired me to answer. I was working as an elementary school librarian in a Title I school in Northern Virginia. Every day, students came in asking for books on superheroes. There were not enough on their reading level to go around. Or even available on the market to purchase. It frustrated me. Like any school librarian, I wanted to meet my students’ needs.

In the Zapato Power series, a boy named Freddie Ramos lives out a fantasy many elementary school students secretly imagine. What if you had superpowers? What would you do? Would you keep them a secret? Would you use them for your own benefit or help others?

Freddie faces many dilemmas. His super speed is a thrill to use when he is alone. But when he is playing basketball with his friends, he feels like he is cheating. The most recent title, Zapato Power #7: Freddie Ramos Hears It All, shows Freddie managing the new power of super hearing. What should he do when he overhears information? Should he act on it? Can he use his super hearing without being a super snoop? 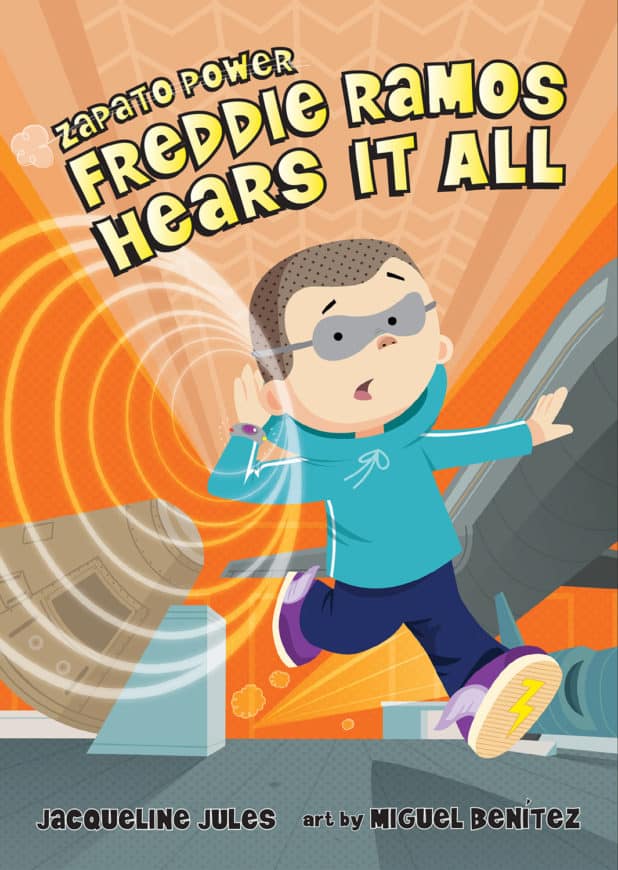 The Zapato Power series invites students to consider what it would be like to have a superhero dream come true. While I was writing it, I imagined my own students and how they would handle having a superhero secret at our elementary school. How would you get away with running in the hallways? How could you help others without revealing your superpowers? I quickly realized that my character would need to be enveloped in Zapato Power smoke, making him invisible every time he ran. Invisibility was a practical solution for Freddie Ramos. He still had social-emotional issues to consider. How would Freddie feel about being an anonymous hero? Would his superpowers make him feel isolated? And could they complicate the problems he faced in everyday life?

All of the characters in the Zapato Power series are named after children I taught as a school librarian. Freddie lives in an apartment complex behind his school, just as many of my students did. When I began the Zapato Power series, I wanted to do more than simply write a story for my students, I wanted to write about them. These kids were special to me for many reasons.

First off, as a school librarian, I had the pleasure of seeing them grow up and visit me each week in the library from their days as Head Start students all the way through sixth grade. Secondly, my students connected me to my own memories of childhood. I was a child of an immigrant myself. I understood when my students said they didn’t eat turkey on Thanksgiving because I had not either, as a child. And I understood when they looked at the floor, listening to a parent speak to a teacher in a heavy accent, because I did, too, as a child. Some things about being a child of an immigrant are universal.

Freddie Ramos is Latino, just like the majority of my students were.

How could I have created a character inspired by my students (and literally named after them) and ignore their cultural heritage? However, Freddie’s family and economic circumstances are the backgrounds of his story. As a school librarian, I was tired of the books on my library shelves which only presented the lives of minority children in the context of the problems they faced. Who wants their existence to be solely portrayed as a problem to be overcome? 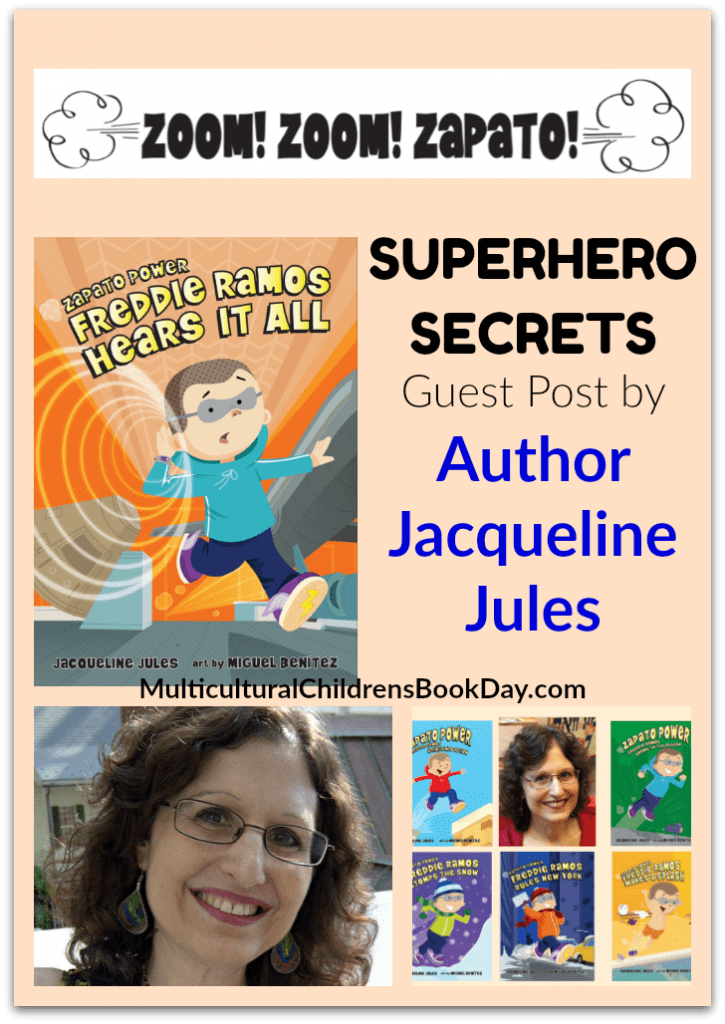 When we write about minorities, we can’t limit their stories to the hardships they face. We need to write about who they really are. Loving, happy kids who have the same desire to be a superhero as anyone else.

Looking for some Zapato Power Activities? I have a bunch on my website HERE~!

BIO: Jacqueline Jules is the award-winning author of 40 children’s books, including the Zapato Power series, the Sofia Martinez series, Unite or Die: How Thirteen States Became a Nation, Duck for Turkey Day, Never Say a Mean Word Again, Feathers for Peacock, The Hardest Word, and Pluto is Peeved. Also a poet, Jacqueline is the author of three poetry chapbooks. Her poems have appeared in over 100 publications, including Cricket, Cicada, Germ Magazine, YARN, The Poetry Friday Anthologies, and One Minute Till Bedtime. She lives in Northern Virginia, just outside Washington, D.C. Visit her website www.jacquelinejules.com. Connect on Facebook at www.facebook.com/BooksbyJacquelineJ/ Twitter @jacquelinejules