May is Asian-American and Pacific Islander Heritage Month in the United States. The month of May was chosen to commemorate the immigration of the first Japanese to the United States on May 7, 1843, and to mark the anniversary of the completion of the transcontinental railroad on May 10, 1869. The majority of the workers who laid the tracks on the project were Chinese immigrants.

But another fact of Chinese immigration is that many of these brave souls ended up in California where they struggled to make a living as fishermen. That nearly forgotten era is preserved at historical sites in the San Fransisco Bay Area like China Camp: a state park that is committed to preserving the Chinese shrimp-fishing village that was created around the time of California’s Gold Rush. 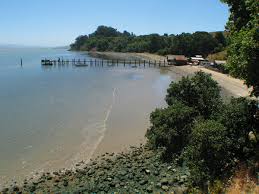 It was a visit to this state park that inspired veteran author, Tim J. Myers, to pen his newest children’s book, Yao Bai and the Egg Pirates published by West Margin Press. 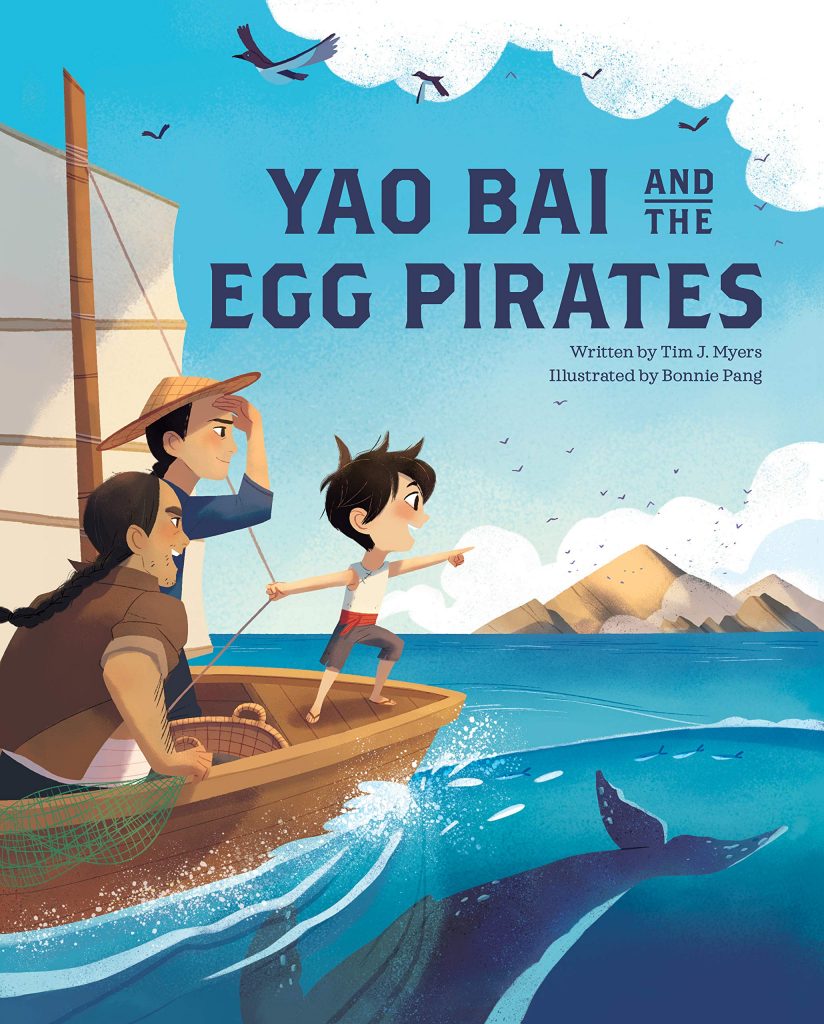 Inspired by the 1863 Egg War and the mad rush for murre eggs on the Farallon Islands near San Francisco, Yao Bai, and the Egg Pirates is a high-seas adventure story celebrating the courage and history of Chinese immigrants in America through a fascinating yet little-known event during the California Gold Rush era.

Yao Bai is finally old enough to sail with his father and uncle to the Farallon Islands, to gather the precious eggs that seabirds had laid there. But on their way home, they encounter trouble on the sea―pirates! Just when Yao’s father and uncle believe their hard day’s work would all be gone, Yao comes up with a clever plan. But will it be enough to save all the eggs?

The Inspiration for Yao Bai and the Egg Pirates

“While on a sightseeing trip to see humpback whales, our tour guide told us about the ‘Egg War’ at an island off the California coast during the Gold Rush,” Myers recalled. “So many miners came to California to find gold that it became difficult to feed them all. People began gathering seabird eggs on the Farallon Islands near San Francisco, especially murre eggs, which were three times the size of chicken eggs. In my story, I imagine that members of a Chinese fishing family have sailed out to the islands for eggs but then encounter egg pirates, which history tells us really existed.  The pirates knew how much the eggs were worth, and weren’t afraid to use violence to get them.”

Intrigued by this real-life occurrence, Myers began to dig deeper into this event and the idea for a historical fiction children’s book began to unfold in his mind.

“Shortly after our whale-watching trip, we visited China Camp and learned more about the Chinese in Gold Rush California,” Myers added. “The sun was still rising in the east as I stood looking out across China Camp—and suddenly I could almost imagine a young Chinese boy scampering across the sand. At that moment, the character of Yao Bai was born. I also recently saw a period photo which included a real Chinese boy at a rough-looking Monterey fishing camp and thought, There he is! I knew his life was important, both in itself and to America as a whole—so I knew I had to try to drag that forgotten story out into the light.  Chinese Americans have made incredible contributions to American life, and too often that’s forgotten or dismissed.” 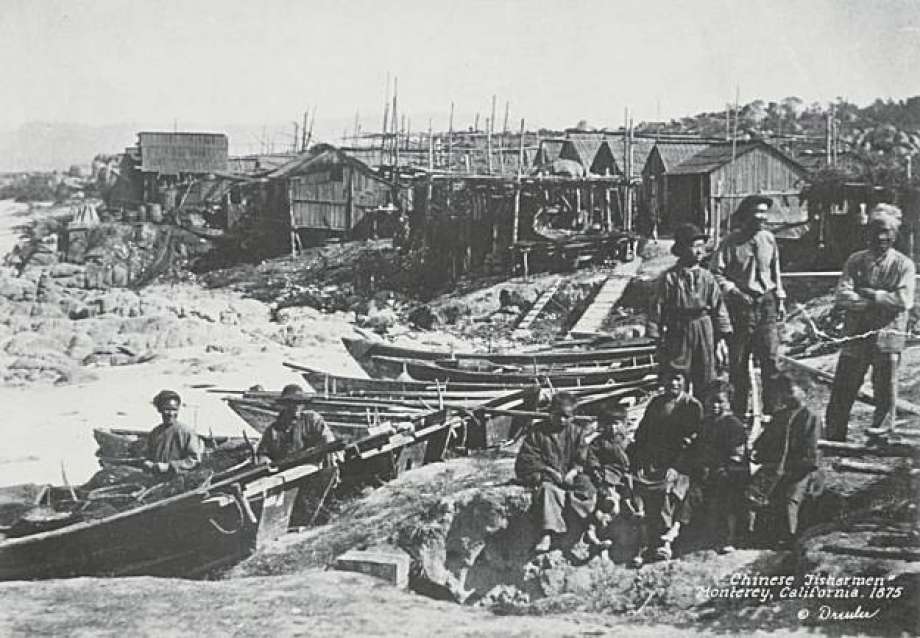 With illustrations by Chinese artist Bonnie Pang, this delightful diverse historical fiction picture book will help young readers understand more about the great courage and adaptability of the Chinese in America.  Connie Yu, the official historian of the Chinese Historical and Cultural Project of Santa Clara, praised Yao Bai and the Egg Pirates. for its research and accuracy. 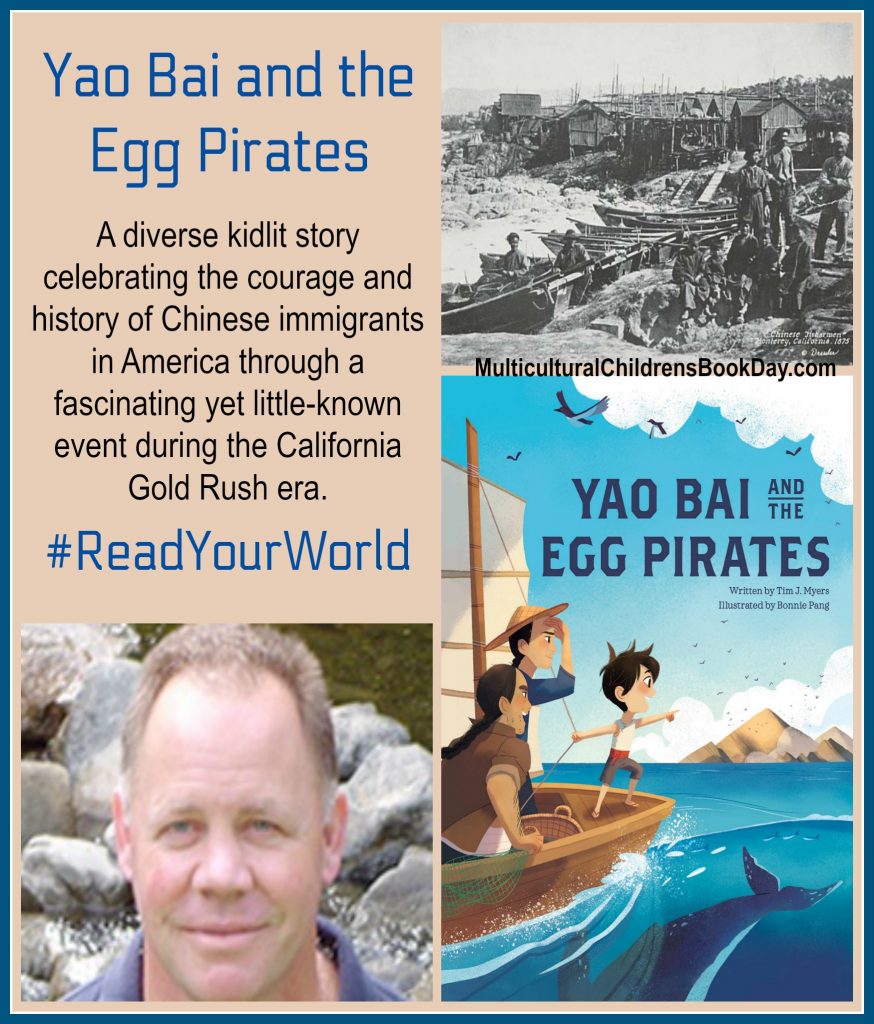 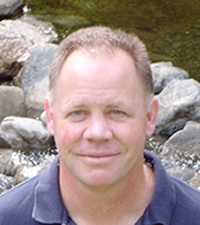 Tim Myers is a writer, songwriter, storyteller, and university senior lecturer in English. When not writing adult non-fiction and children’s fiction, he can be found working in the English Department at Santa Clara University. To date, Myers has published a whopping 22 books–15 of which are children’s books. Some of his diverse children’s book titles include Let’s Call Him Lau-Wiliwili-Humuhumu-Nukunuku-Nukunuku-Apua’A-Oi’Oi, The Thunder Egg, The Outfoxed Fox: Based on a Japanese Kyogen, and Basho and the River Stones. 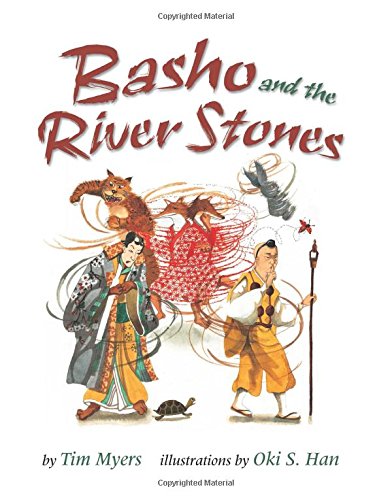 Tim won the 2012 SCBWI Magazine Merit Award for Fiction and, as a fantasy/science fiction writer, he won a prize in the Writers of the Future Contest, and his work has appeared in Realms of Fantasy, Worlds of Fantasy and Horror, Space & Time, Weird Tales, Abyss & Apex, Futures Mysterious, on the Astropoetica website, and elsewhere.

When asked what advice he would give to young writers, Myers had this to say:

“Those three words are the best way I know for authors to ‘get there.’ And the repetition is just as important as the categories,” Myers shared. “It’s a privilege to be an artist and to be part of the publishing world. I get a waterfall of joy in my brain every time I think about how lucky I am to be able to create art. And being able to merge that passion with my love for kids and teaching amplifies that joy even more. Writing Yao Bai and the Egg Pirates was, to me, a perfect opportunity to retell a moment in our past that’s in danger of being lost—a way to turn forgotten history into something fun and educational, in order to keep that human reality alive. ”

Connect with Tim J. Myers via his website, Amazon Author Page, and Facebook. For more information on Yao Bai: http://www.timmyersstorysong.com/TM_Website/Yao_Bai_by_Tim_J._Myers.htm

One of the greatest things about being a writer is discovering your own life in your work.

You can’t help writing about what’s important to you, and your experiences often show up in different forms, whether you intended that or not.  Art often is, among other things, a window into our deepest human selves.  I write for adults and young people, in multiple genres, and in my 22 published books and many individual pieces, I continually find glimpses of my life that worked their way in naturally.  I love how art is so inevitably self-revealing, and that’s one of the reasons I love writing.

Many of my books, for example, are multicultural in one form or another.  My family and I lived in Japan for three years, and, although I didn’t plan it, five of my children’s books are on Japanese themes.  One, I’m proud to say, was a New York Times bestseller for children’s books and was read aloud on NPR; Basho and the Fox are also about how important poetry is to me.

As it happens, I’ve recently been thinking about two childhood memories that, I realized, pushed themselves uninvited into my newest book, Yao Bai and the Egg Pirates—memories that reflect something basic about who I am.

I didn’t come from a reading family, and I was, at best, an indifferent student in elementary school.  But I can remember like it was yesterday the day the teacher passed out our first “reader”—it must have been in third or fourth grade.  For some reason, I went through the book on my own at home, and found in the back of it a palace of treasures.  Our teacher never had us read any of those stories, but I read every one more than once–which was not like me.  Why such uncharacteristic behavior? 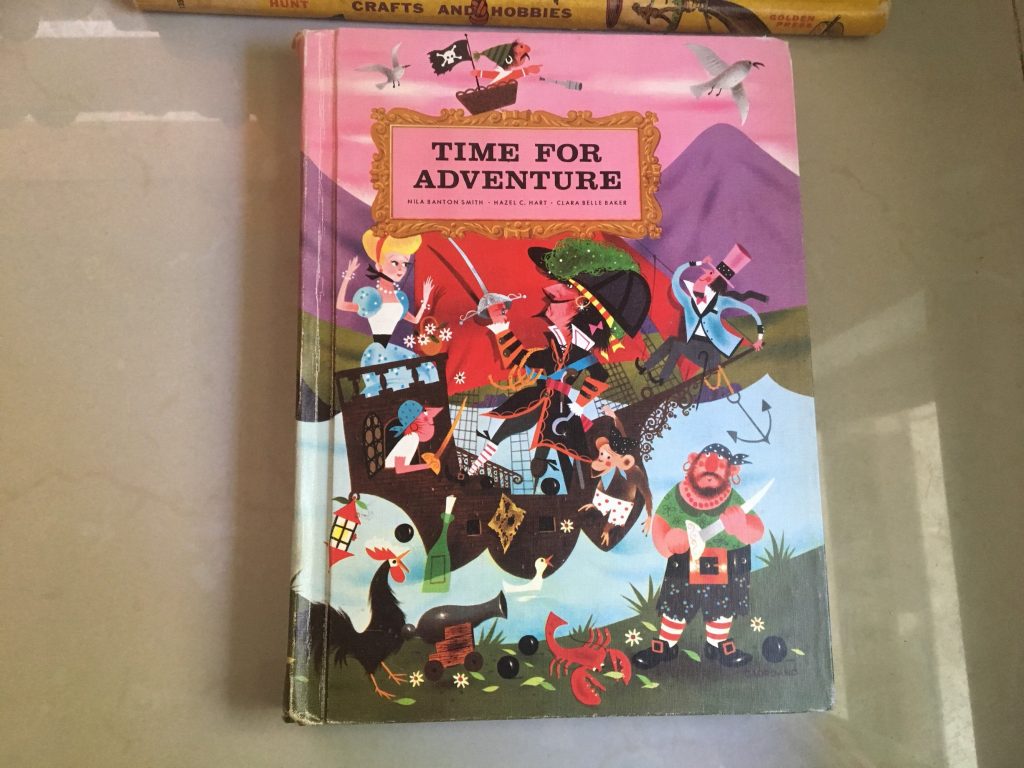 They were fairy tales.

The second memory is of a longer period.  I grew up in Colorado Springs, “in the shadow of Pikes Peak” as the phrase goes.  I can hardly describe the natural beauty of the Pikes Peak Region.  The mountain looms over the entire city, and it was always there in my life, a manifestation of the physical grace and power of the natural world that I imbibed with mother’s milk.  The Utes call Pikes Peak “Sun Mountain,” and it’s sacred to them.  I think of it as a grandmother, and it’s sacred to me too. 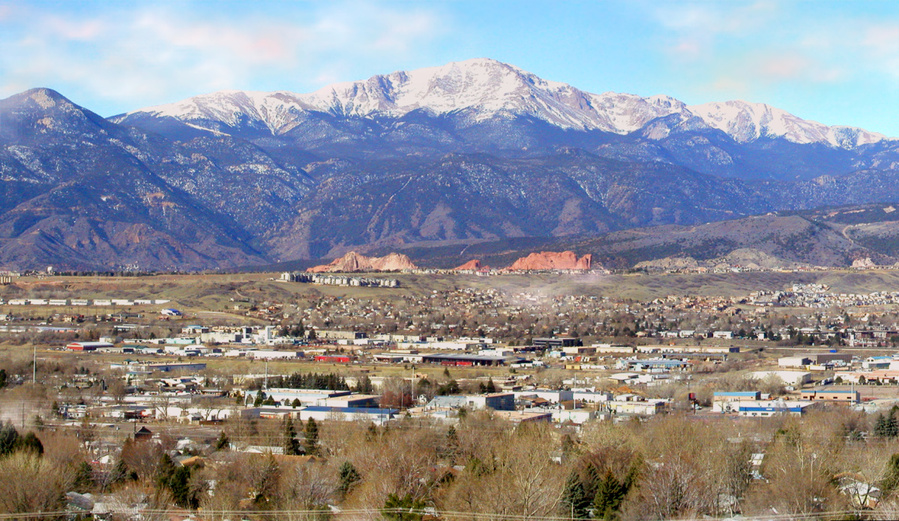 So here were two towering impulses in my life:  the love of Story and an unwavering sense of wonder, which I first experienced through the wonder of the natural world and fairy tales.  I could give many other examples of how those impulses shaped my life and work.  Suffice it to say that my new children’s book includes both.

Yao Bai is historical fiction, the story of a Chinese boy during the California Gold Rush.  When I first visited China Camp here in the Bay Area, a state park that’s preserved a Chinese shrimp-fishing village from that time, I could almost see a boy running across that beach back in the 1850s.

I recently saw a period photo including a Chinese boy in Monterey and thought, There he is!  I knew his life was important, both in itself and to America as a whole—so I knew I had to try to drag that forgotten story out into the light.  Chinese Americans have made incredible contributions to American life, and too often that’s forgotten or dismissed.

But I couldn’t write the story without some wonder in it too.  So I’ll leave it at that.  I love stories, after all; I’d never give away the ending!

So here’s to reading and writing—may we all keep on discovering ourselves in the magic of the printed word!

Tim Myers is a writer, songwriter, storyteller, and university senior lecturer in English. His Glad to Be Dad: A Call to Fatherhood (Familius)

is in both e-book and print form; it was featured on Parents Magazine’s website, Disney’s BabyZone, and won the Ben Franklin Digital Award. His full-length Dear Beast Loveliness: Poems of the Body (BlazeVox) earned an excellent review from poet Grace Cavalieri, and Nectar of Story won praise from Cavalieri, Chase Twichell, Ron Hansen, and Joseph Bruchac.

Tim won the 2012 SCBWI Magazine Merit Award for Fiction and, as a fantasy/science fiction writer, he won a prize in the Writers of the Future Contest, and his work has appeared in Realms of Fantasy, Worlds of Fantasy and Horror, Space & Time, Weird Tales, Abyss & Apex, Futures Mysterious, on the Astropoetica website, and elsewhere.