Mahvash Shahegh is an author, educator, researcher, and translator. She has written a book that will be published by Wisdom Tales under the title The Green Musician (coming in August, 2015). It is a children’s book that is being illustrated by Claire Ewart. The Green Musician was translated and adapted from a major Persian epic poem that is over a thousand years old, and Mahvash focused the story in the book on a small segment of the epic poem. The text of Mahvash’s book is not in the form of poetry, but she has managed to maintain the feel of a magical time and place long ago with vivid images of grand royal events, jealous opponents, magnificent gardens, enchanting music and the power of persistence!

The Green Musician: If you had just one chance to achieve your dream, what would you do? In a distant kingdom lived a young musician named Barbad. His one dream was to play before the king in the royal court. But Barbad’s way was blocked by Sarkash, a jealous rival who would do anything to stop Barbad from meeting the king. But perhaps the palace wasn’t the only place to play before the king, for he loved to walk in his garden. What if Barbad was to hide in a tree for just the right moment to play? 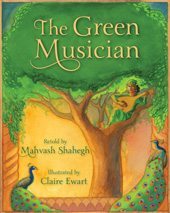