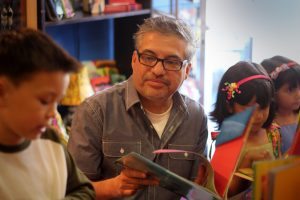 Born and raised in East LA, Joe received his BFA in illustration from California State University, Long Beach in 1992 and also studied Engineering at Cornell University. Only months after leaving school, he secured a book contract with a publisher after his first meeting and has been illustrating books ever since. 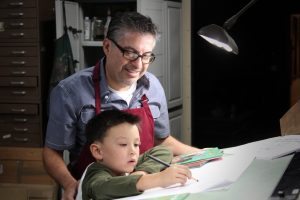 He is the illustrator of awarding-winning picture books such as What a Truly Cool World and Nappy Hair. His latest book is Swing Sisters. 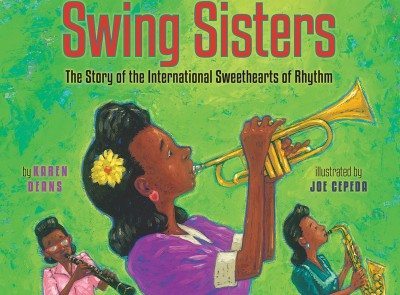 Today, he shares some of books that mean a lot to him … and we asked him to pick a few favorites of his own from among his many titles.

Swing Sisters: The Story of the International Sweethearts of Rhythm

My newest book, Swing Sisters, is a great story of the first all-female, integrated jazz band who thrived in the face of racism and sexism. This book offered the challenge of creating illustrations that were joyous and kinetic and reflected the positivity of these wonderful musicians, while staying close to the historical narrative. One of the great opportunities an illustrator enjoys taking on with a title like this is to tell a story with accuracy while still revealing its emotional current. That’s the magic of good illustration.

This is a fun story written by Pam Muñoz Ryan about a woman named Rosa María who has a long to-do list to get ready for her granddaughter’s birthday party, and gets some unexpected help from a group of mice. My mom is named Rosa María, so I couldn’t resist modeling the character after her — a shorter, rounder woman with dyed-blonde hair. There was a lot of humor written into this story, so opportunities for comedic scenes were plentiful.

Side By Side/Lado a Lado: The Story of Cesár Chavez and Dolores Huerta

This is the first book I illustrated about historical figures, and it was a true honor to illustrate a book about two people whom I hold in very high regard. I’m Chicano, grew up in the 1960’s and 70’s, and didn’t eat grapes for a long time. I am very grateful to have a part in telling the story of Cesár Chavez and Dolores Huerta. Although I didn’t grow up in the San Joaquin Valley, my father, and much of my family, is connected to the area. I dedicated the book to the children who grow up there.

One day I was pushing my niece on a backyard swing, and I started to imagine what would happen if a girl swung so hard she got lost in a tree. The Swing, which I both wrote and illustrated, is about a family that seems to lose everything, and it takes a determined young girl to help them find everything they need. Everything and everyone in the book is very familiar to me, and I pretty much painted the neighborhood I grew up in.

Perhaps one of my favorite all-time projects is the Freddy books. There are five of these illustrated chapter books, and I was hesitant when my editor first introduced the story to me. However, after I read the first book, I was desperate to illustrate Freddy, as well as his delightful companions: his best friend, Sir William the Cat, and Enrico and Caruso, a couple of hilarious guinea pigs.