Musings About Diversity in Children’s Literature

From The Mixed Up Files of Middle Grade Authors: Diversity in Children’s Literature: The Search for the Missing Characters (and Authors!) of Color

From The Mixed Up Files of Middle Grade Authors: Are Multi-Cultural Books Dead? Maybe … Maybe Not.

“I have given up using the term “multicultural.” I think its overuse has reduced it to a cliché. Also, in my opinion, it’s imprecise. You can describe a collection of books as “multicultural” if it contains titles from many cultures but how on earth can the term describe a single book grounded in a single culture, or even a book with elements of cultural fusion or blending?

Lee and Low: Why Hasn’t the Number of Multicultural Books Increased in 18 Years? 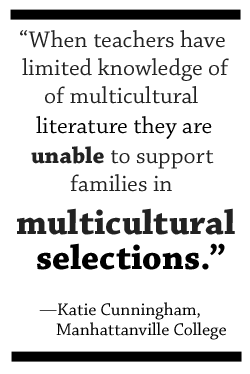 “By making light of that deep and troubled history, he [Handler] showed that he believed we were at a point where we could laugh about it all,” she writes. “His historical context, unlike my own, came from a place of ignorance.”

The Daily Dot: One of Book World’s Biggest Expos at the Center of Diversity Battle

“This isn’t a mistake. It isn’t an oversight. It is an overt statement of Book Expo America’s values, and apparently, giving writers of color attention and a platform and access to readers is not one.”

Media Diversified: “You Can’t Do That! Stories Have To Be About White People”

Almost without exception, whenever children are asked to write a story in school, children of colour will write a story featuring white characters with ‘traditional’ English names who speak English as a first language. a friend of mine who writes for children, has been told by publishers that by making her central character a black girl, she will reduce its marketability – so unless she is writing specifically about ‘black issues’ she should make her ‘front-cover’ characters white. In her essay ‘Playing in the Dark’, Toni Morrison argues that “the readers of virtually all of American fiction have been positioned as white.”