We are so thrilled to have Mitali Perkins today talking to us about her anthology Open Mic: Riffs on Life Between Cultures in Ten Voices. 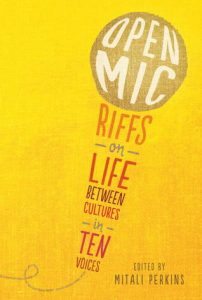 Mitali Perkins was born in India, immigrated to the United States with her parents and two sisters when she was seven, and studied political science at Stanford University and Public Policy at U.C. Berkeley. 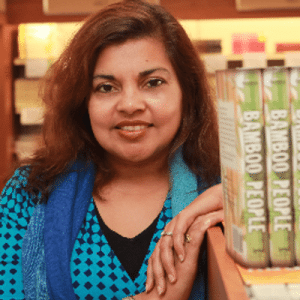 She’s the author of nine books, including Rickshaw Girl, which was chosen by the New York Public Library as one of the top 100 books for children in the past 100 years, and Bamboo People, which is an American Library Association’s Top Ten Novels for Young Adults and was starred and described in Publishers Weekly as “a graceful exploration of the redemptive power of love, family, and friendship.”

Mitali lives in the San Francisco Bay Area with her family prior to living in Newton, MA where I was lucky enough to have her visit my daughter’s book club! We miss her in Newton, but she’s visiting soon for an author visit for her latest children’s book, Tiger Boy. Details on her author visits below!

But first, a little more about Open Mic: Riffs on Life Between Cultures in Ten Voices.

1. A friend in publishing once told me, “Short stories don’t sell.’ What motivated you to create a short story anthology about race based on the author’s personal experience?

We were aiming for the shorter, crisper “Open Mic” feel in this anthology. We also wanted to create a venue for many voices. Plus, I am a firm believer that we shouldn’t limit our creativity by any sentence that ends with “—- don’t sell.”

2. How did the other 9 contributors come about?

The editors at Candlewick and I approached them. We knew some of them were funny thanks to their social media presence. We also opened one slot for an up-and-coming writer and received submissions. The winner of that was Debbie Rigaud for her piece called “Voilà.”

3. It must have been challenging to come up with the line up. How did you decide the order of the stories?

The editors and I had a brainstorming session which was fun. We talked about gender, race, humor style, writing genre, and other issues before deciding on the on the order. Fortunately, I was still living in Newton at the time and Somerville is nearby.

4. You grew up in San Francisco, lived in Newton, MA (where I was lucky to be your neighbor) and you’re back in San Francisco. Any observations about living as a person on color was and is different on either coast?

The West Coast has a distinctive Pacific Rim vibe that makes it easier, in my view, to be hyphenated with an Asian origin. Newton, however, is a distinctively inclusive, welcoming community. It seems like the librarians, teachers, booksellers, and publishers in the Boston area are always ahead of the curve when it comes to justice and diversity.

5. What are you reading now?

I just finished INTO THE BEAUTIFUL NORTH by Luis Urrea, a book that’s written for adults but seems very YA to me. I’m also reading a lot of picture books.

Just yesterday my agent sold my first picture book in a two-book deal, so I’m VERY excited about that. It’s set in California, along the border.

TIGER BOY comes out April 14th and I am hosting book launch parties on both coasts — April 18 at 1 p.m. in Berkeley, California at Mrs. Dalloway’s Bookstore and April 26 at 4 p.m. in Newton, Massachusetts at Newtonville Books. Hope to see some of you there! 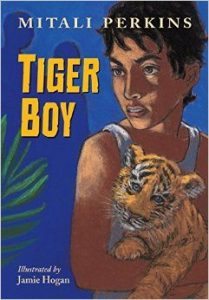 Set in the lush Sundarbans natural region of Bengal, this quiet, gripping tale emphasizes the deep but often fragile connection that exists between humans and nature … Perkins avoids black-and-white characterizations and compassionately illustrates how dire circumstances affect a person’s choices. Young readers will revel in the vivid action and suspense surrounding Neel and his sister Rupa’s quest to locate the tiger cub. Adults will likely praise the novel’s simple and clear narrative, which belies its complexity around issues related to climate change, poor economic conditions, class structure, and gender discrimination. [chapter book, for grades 3-6th]