We are so excited to present our #ReadYourWorld Book Jam 2019 in conjunction with Children’s Book Council! This year we have 10 amazing authors with unique book lists to share. Each author is also doing a book giveaway!

Please welcome e.E. Charlton-Trujillo with her list of LGBTQIA+ Books Bridging The Gap of “Other” We are giving away 3 galleys of her book, Fat Angie: Rebel Girl Revolution. To enter, please fill out the Rafflecopter at the bottom.

The books on this list celebrate the beautiful and sometimes challenging experience of being LGBTQIA+ while exploring universal themes of adolescence. Diverse books that address the intersectionality of race, orientation, class, gender, ability, neurodiversity, and religion (to name a few) allow readers to continue conversations around how we think about and look at those often perceived as “different.” That is the magic of story. It gives us heart and humor, grief and sadness — it gives us a safe place to realize that within our differences is a shared core of humanity.

LGBTQIA+ Books Bridging The Gap of “Other”

Anger Is Not A Gift by Mark Oshiro

Six years earlier, Moss Jeffries lost his father to police violence. While struggling with self-doubt and panic attacks, his family, friends and boyfriend, Javier, anchor him. But as a new year begins at West Oakland High, he and his friends are targeted by a homophobic resource officer. As tensions rise, Moss has to decide if anger truly is a gift – one that could help him rise against injustice. [young adult, ages 14 and up]

Darius The Great Is Not Okay by Adib Khorram

Visiting Iran for the first time with his family, bi-racial Darius Kellner faces the same insecurities of not fitting in that plagued him in America. These feelings may be even stronger in Iran, but meeting Sohrab allows Darius to begin to see himself beyond the haze of depression and start to love who he is. [young adult, ages 12 and up]

Angie is bullied for her weight, her sister who’s missing in the Iraq War, and her own public suicide attempt. And there’s no respite for her at home. But Angie’s life takes an unexpected turn when KC Romance moves to town. A darkly comic, anti-romantic romance. [young adult, ages 14 and up]

More trouble at school and home, a girlfriend who’s moved away, and the discovery of a letter from her late soldier sister, sends Angie on an RV road trip with the last people she would have expected. What ensues is a revolution to reclaim who Angie is! [young adult, ages 14 and up]

Laila Piedra doesn’t take risks. She revises her life on the page. But when an accident puts her beloved creative writing teacher in the hospital, Laila’s efforts to prove herself to teacher replacement Nadiya Nazarenko, a Pulitzer Prize-winning novelist, force her outside her comfort zone. Laila must learn that life is lived in real experiences, and not just in her head. [young adult, ages 14 and up]

Here To Stay by Sara Farizan

Bijan’s excitement of making the Varsity basketball team is short lived as a cyberbully spreads a Photoshop picture of him with a gun. Bijan, of Middle Eastern heritage, doesn’t want to the be the poster child for Islamophobia, but when two of his lesbian friends fall prey to the cyberbully, he realizes he has to stand-up. While the protagonist is not LGBTQIA, he is an ally and the book is so good I had to add it. [young adult, ages 14 and up]

If I Was Your Girl by Meredith Russo

Amanda Hardy starts a new life at a new school with a big secret. A secret she plans to keep until Grant comes into her world. As they become closer, she fears what will happen when she shares her truth. This is a groundbreaking and important trans story for young people. [young adult, ages 14 and up]

Picture Us In The Light by Kelly Loy Gilbert

High school senior and artist Danny Cheng’s life is full of secrets. His secret crush on best friend Harry. His family’s secrets about Danny’s late sister. But it is a secret box of letters in his father’s closet that changes his world forever. [young adult, ages 14 and up]

We are giving away 3 galleys of e.E. Charlton-Trujillo’s book, Fat Angie: Rebel Girl Revolution. To enter, please fill out the Rafflecopter below. 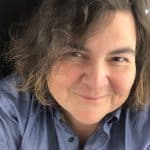 e.E. Charlton-Trujillo is an award-winning Mexican American YA and Middle Grade author, filmmaker and youth activist who grew up in small-town South Texas. She is the author of four novels, including the ALA Stonewall Winner Fat Angie. She is also the co-founder of the nonprofit Never Counted Out which empowers at-risk youth through access to books and the arts. Her novel Fat Angie: Rebel Girl Revolution releases March 5, 2019.