We are so excited to present our #ReadYourWorld Book Jam 2019 in conjunction with Children’s Book Council! This year we have 10 amazing authors with unique book lists to share. Each author is also doing a book giveaway!

Please welcome Mariana Llanos with her list of Eight Essential Children’s Books to Build Empathy About Immigration. We are giving away 10 copies of her book, Luca’s Bridge/El puente de Luca. To enter, please fill out the Rafflecopter at the bottom.

Why do people emigrate? This is a question that doesn’t get asked and answered quite enough. Nevertheless, in the current climate people are quick to judge those who chose to leave their homes behind. I’m an immigrant, and as such, I am proud to represent all those millions of people who work tirelessly to build a better future for themselves and their families.

I’m thankful for this opportunity to share some of the books I consider essential to fight prejudice and intolerance. I came across most of these titles when I was researching for my new book Luca’s Bridge/El Puente de Luca (Penny Candy Books, 2019). These books are all wonderful in their own right, but together they make a powerful statement of empathy: build bridges of words, tear the walls of ignorance.

Hannah is My Name by Belle Yang

Excerpt: “When we are Americans, Baba says we will be free to say what we think. An American girl is free to be anything she chooses, says Mama. We want to become Americans more than anything in the world. We want to be free.”

Hannah is My Name conveys the hope, fear, and love of an immigrant Taiwanese family waiting for their green cards while working without authorization. I love Hannah’s child-like voice, her innocence and awareness of her family’s urgency for that little piece of paper that holds their present–and future–hostage. [picture book, ages 5 and up]

América is Her Name by Luis J. Rodriguez, illustrated by Carlos Vázquez

Excerpt: “Yesterday as she passed Miss Gable and Miss Williams in the hallway, she heard Miss Gable whisper, “She’s an illegal.” How can that be—how can anyone be illegal! She is Mixteco, an ancient tribe that was here before the Spanish, before the blue-eyed, even before this government that now calls her “illegal”. How can a girl called América not belong in America?”

América Soliz, a nine-year-old immigrant from Oaxaca, Mexico, can’t find her voice in the loud and often hostile streets of her new home Chicago. But after a poet visits her ESL class, she’s offered a friendly reminder that her voice lives still inside her. América’s voice comes out roaring in the form of poetry! Even when her dad thinks that writing won’t pay the bills, América knows it’ll give her some things as important: hope; strength; freedom. [picture book, ages 6 and up]

Excerpt: “I make a clown face, half funny,

half scared. “I don’t speak English,” I say to Papi.

“Will my tongue turn into a rock?”

The Upside Down Boy/ El niño de cabeza vibrates with fire, rhythm, and color. A hopeful self-portrait of a Latino boy who goes to an English-language school for the first time, this book speaks to me, an English language learner for life, because my tongue still feels like a rock at times. [picture book, ages 6 and up]

Excerpt: “And when we made it

To the other side,

Unable to go back,

In Dreamers, Yuyi Morales takes us by the hand and invites us to walk with her and her young son as they become immigrants in the United States. I, too, was just like Yuyi, the mom who discovered the public library and craved every bit of those books on the shelves. I, too, was the mom who left the building with books overflowing her stroller. And I, too, ate and breathed books until I became one with them. Dreamers celebrate immigrants and their drive to make the unimaginable possible. [picture book, ages 4 and up]

The Journey by Francesca Sanna

Excerpt: “She shows us pictures of strange cities, strange forests and strange animals, until she finally sighs, “We will go there and not be frightened anymore.”

Argentine folk-rock singer Leon Gieco famously sang in his song, “I Only Ask God/Solo le pido a Dios,” “war is a huge monster that tramples heavily all the poor innocence of people/[la guerra]es un monstruo grande y pisa fuerte toda la pobre inocencia de la gente”. The Journey offers the perspective of those who flee their home due to war. In this book, we see the snarling teeth of war as it threatens a little girl’s family and takes her father away. She, along with her mother and brother, are left to find an escape route to safety. Poignant and timeless, The Journey is a reminder that hope for a better future is a universal right. [picture book, ages 5 and up]

I remembered my mother,

when I will see them again.

I look at the sky

Somos como las nubes/We’re Like the Clouds is a collection of poems in English and Spanish that narrates the migration of a scared young boy who flees the violent gangs on the streets of his country El Salvador. Touching and necessary in these particular times, this book lets us in the dreams of those migrants who walk a perilous journey to find shelter and a new place to call home. [picture book, ages 7 and up]

Excerpt: “Soon, mijo. Remember, Papá is a permanent resident now. He has submitted my papers already and a lawyer is working on my case,” she said.

Jose’s mom has been deported to Mexico. She lives in Tijuana, a border town where Papa and Jose visit her while she gets her papers. Their hope to be reunited grows like the seeds on the garden she and Jose tend when they’re together. Sadly, this isn’t the case for many families who do not have the option to “fix” their papers. Even though the book doesn’t dig deeper into the complexity of obtaining legal status, I think it does a great job shining a light on the issue of family separation. May all the children like José find their way to their parents. [picture book, ages 5 and up]

Excerpt: “This is it,” Papi said, and he squeezed Mami’s hand. Luca felt their hearts were squeezing too.

Luca could see a bridge in the distance. A cloud covered the sky. Everything had turned gray and scary, even the guards.”

When I was writing this story, I realized there is no such thing as a green card fairy. I wanted to offer readers a new perspective because sometimes our tales don’t end the way we want them to end. That doesn’t mean that we lose hope or joy for life. It just means that we keep on walking and building our future in a different way. Luca’s parents are deported. Their children, Luca and Paco, are American citizens. In order to keep the family together, they all go live in grandma’s tiny house in a town in Mexico. But to Luca, everything is foreign—this isn’t his home! How can he cope when his heart is torn in two, one-half still (and forever) living on the other side of the border? [picture book, ages 4 and up]

We are giving away 10 copies of her book, Luca’s Bridge/El puente de Luca. To enter, please fill out the Rafflecopter at the bottom. We can only mail to U.S. addresses. 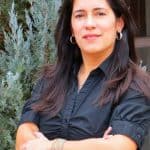 Born in Lima, Peru, to two journalists, MARIANA LLANOS developed an early passion for writing and studied theater in the prestigious CuatroTablas school in Lima. She has lived in Oklahoma since 2002, where she worked as a teacher in a preschool center. In 2013 Mariana self-published her first book, Tristan Wolf, which won a Finalist in the 2013 Readers’ Favorite Book Award. Since then, she has published seven books independently in English and Spanish and through virtual technology has chatted with students from more than 150 schools around the world to promote literacy.