Oh my goodness! The days and weeks are FLYING by and before we know it it will be 1/27/18 and time for the big celebration! If you have not already done so, be sure and visit our Medallion Level Sponsor Page and our Author Sponsor Page. There are a ton of very impressive and talented authors and publishers participating in MCBD2018.

A few months ago I shared that, because of my role as Project Manager, I get the honor of seeing and reading a TON of amazing multicultural books for kids that are donated to our project. And as a result, I wanted to find a fun way to share those books with the loyal folks who show up here to read every week and support this non-profit.

I am so proud of how well this series has taken off and even more pleased at the enthusiastic reactions of the authors and the readers every time I offer up a new “load” of Diverse Picture Books that the Mailman Book Fairy brought me. This week is no different 🙂 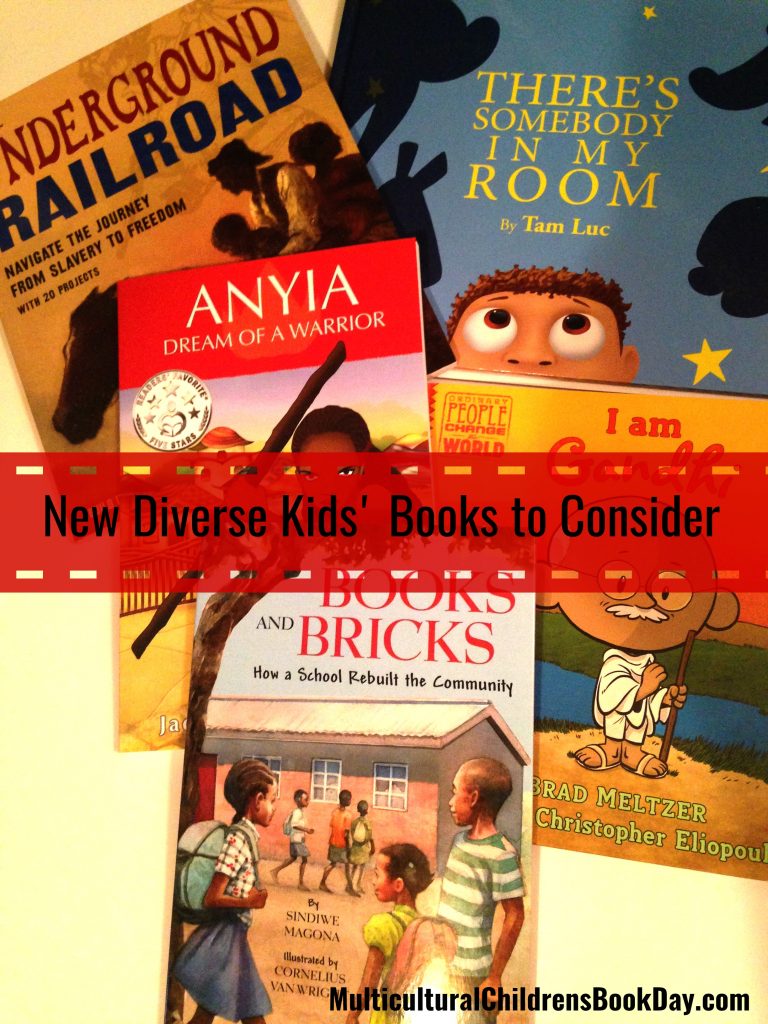 The Underground Railroad: Navigate the Journey from Slavery to Freedom by Judy Dodge Cummings 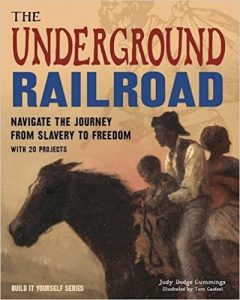 Imagine leaving everything you’ve ever known—your friends, family, and home—to travel along roads you’ve never seen before, getting help from people you’ve never met before, with the constant threat of capture hovering over your every move. Would you risk your life on the Underground Railroad to gain freedom from slavery?

In The Underground Railroad: Navigate the Journey from Slavery to Freedom, readers ages 9 to 12 examine how slavery developed in the United States and what motivated abolitionists to work for its destruction. The Underground Railroad was a network of secret routes and safe houses operated by conductors and station masters, both black and white. Readers follow true stories of enslaved people who braved patrols, the wilderness, hunger, and their own fear in a quest for freedom.

In The Underground Railroad, readers dissect primary sources, including slave narratives and runaway ads. Projects include composing a song with a hidden message and navigating by reading the nighttime sky. Amidst the countless tragedies that centuries of slavery brought to African Americans lie tales of hope, resistance, courage, sacrifice, and victory—truly an American story.

Judy Dodge Cummings writes fiction and nonfiction for children and teens from her home in the Driftless region of Wisconsin. She is the author of nine books with four more slated for publication in 2017. History informs Cummings’ writing. She taught high school history for 26 years, a career that shaped her story-telling skills. Cummings earned two BA’s from the University of Wisconsin-Eau Claire, one in Psychology and one in Social Science, and a MFA in Creative Writing for Children and Young Adults from Hamline University.

There’s Somebody in my Room by Tam Luc 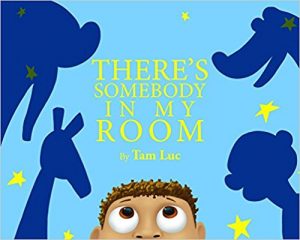 Allured by the warm, relaxing international flavor of Los Angeles, Tam Luc blew into California at the turn of 2000, from the freezing grips of the Northwest. While attending college, Tam flew as an International Flight Attendant and first penned several children’s books exploring the connections between people and cultures through the eyes of a child.

As an entrepreneur, wife and mother balancing family life and work life is her number one priority. So her first editor was none other than her 12-year-old son. The best decision she ever made.

I am Gandhi  by Brad Meltzer

Gandhi’s peaceful revolution is the focus of this picture book 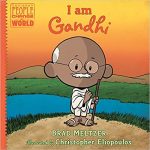 As a young man in India, Gandhi saw firsthand how people were treated unfairly. Refusing to accept injustice, he came up with a brilliant way to fight back through quiet, peaceful protest. He took his methods with him from South Africa back to India, where he led a nonviolent revolution that freed his country from British rule. Through his calm, steady heroism, Gandhi changed everything for India and inspired civil rights movements all over the world, proving that the smallest of us can be the most powerful.

This friendly, fun biography series focuses on the traits that made our heroes great—the traits that kids can aspire to in order to live heroically themselves. Each book tells the story of one of America’s icons in a lively, conversational way that works well for the youngest nonfiction readers and that always includes the hero’s childhood influences. At the back are an excellent timeline and photos.

Brad Meltzer is the New York Times bestselling author of Heroes for My Son, Heroes for My Daughter, and a number of suspense novels like The House of Secrets. He is also the host of the History Channel television shows Brad Meltzer’s Decoded and Brad Meltzer’s Lost History. He lives in Florida with his wife and their three children.

Christopher Eliopoulos began his illustration career at Marvel Comics, and has worked on thousands of comics, including Franklin Richards: Son of a Genius, Pet Avengers, Cow Boy, and Cosmic Commandos, all of which he wrote and illustrated. He lives in New Jersey with his wife and their identical twin sons.

Books and Bricks: How a School Rebuilt the Community by Sindiwe Magona

Books and Bricks is a compelling and uplifting story about self-reliance and community building. 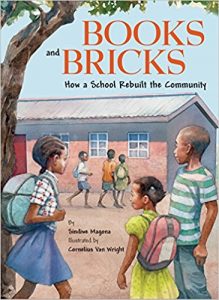 Salmina Arenda s school was a scary place. The fence had holes, the walls needed paint, and the yard was full of weeds and rubbish. But things started to look up when the school received new computers. Then disaster struck the school! Now parents, teachers, and students alike must rally together to revive their school and community.

Books and Bricks is based on a real event at a primary school in Cape Town, South Africa, shortly after the historic elections in 1994, that ended apartheid and elected the first black president, Nelson Mandela. Change, even change for the better, can be unsettling yet it provides an opportunity to work together to improve the world. Books and Bricks is a compelling and uplifting story about self-reliance and community building.

Sindiwe Magona grew up in South Africa under Apartheid. While she trained to be a primary teacher, she was unable to obtain a position and became a domestic worker to support her three children. She later earned a BA from the University of South Africa and a Master’s Degree from Columbia University. She worked for the United Nations for 23 years. A prolific author of novels, poetry, and children s books, Magona s writing reflects her experiences with poverty, single-parenthood, racism, teaching, and social activism. She has won South Africa s highest literary awards as well as a Lifetime Achievement Award for contributions to South African literature. She currently lives in Cape Town. 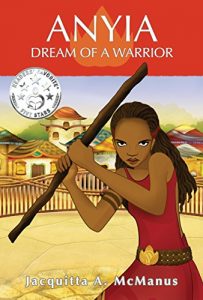 “All my life, I’ve gravitated to fantasy stories, stories I felt I could be a part of, where I could completely immerse myself in my imagination.” – Jacquitta A. McManus

Jacquitta A. McManus, a little girl from Kentucky, was always drawn to fantasy stories. It was a way for her to engage in exciting adventures in faraway lands she would otherwise never experience. As she got older she found that immersing herself in those tales in her childhood would lead her to writing her own. Ms. McManus is the author of two full-length children’s fantasy adventure stories: Labyrinth’s Door-Anyia, Dream of a Warrior, and Talee and the Fallen Object.

Book Reviewers! We need you for MCBD2018!

Multicultural Books for Kids Pinterest Board has even more reading ideas.

Watch for the #ReadYourWorld hashtag on social media and share

SUMMARY OF THE EVENT

FIRST, a giant blog tour —
so that readers, parents, teachers, librarians, and caregivers can explore lots of books with diversity content via book reviews, book lists, and links.

SECOND, a giant networking event —
to connect organizers, sponsors, co-hosts, bloggers, and others interested in expanding awareness of, and promotion of multicultural children’s books.

THIRD, a virtual book drive —
to place multicultural books in locations where they are needed.

Following the book review, you will find information and links for the generous SPONSORS, CO-HOSTS, and PARTNERS of the MCCBD global event.

Have Questions? Email the MCCBD Project Manager at Becky (at) MulticulturalChildrensBookDay (dot)com.

MCBD is on Instagram! Connect with us and #ReadYourWorld!