For our Multicultural Children’s Book Author spotlight series, we are thrilled to have Cynthia Kadohata talking about her latest book, Half a World Away. 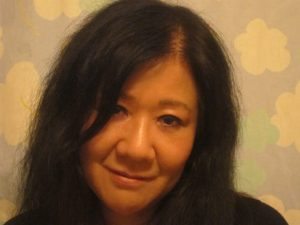 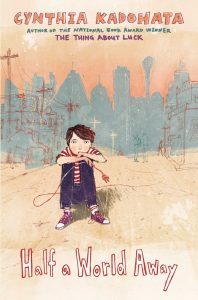 I don’t have a favorite letter of the alphabet.  I love all of them, and I think it’s a miracle the way those 26 letters can create whole books.

Question 2: What do you want readers to know about Half A World Away?

I guess I would want readers to know that heroes come in many different shapes and sizes, and that we each have the potential for greatness in our everyday lives.Question 3: What made you think to put together the concept of electricity with attachment challenges in international adoption? How did you come to read The Spark of Life (which is mentioned in Half a World)?A couple I know adopted a troubled 8-year-old Romanian boy.  The mother wrote me notes about her experiences, and one of the things she told me was that when he got to America he was fascinated by electricity and would just turn lights switches on and off and on again.  Even today he still marvels about electricity.  I read The Spark of Life as research for the book.

Question 4: Because 12-year-old Jaden has never learned how to love, he makes it hard for the reader to attach to him as a character. It is hard for you to create an unsympathetic character, knowing that the reader might also fail to bond with him?

I never for a moment thought of him as unsympathetic.  He was in pain.  He makes an amazing decision in the end.  How many other people would have made that same decision?  I think he’s absolutely heroic.

I’m working on two books at once, which I’ve never done before.  One is about a boy learning to be a falconer, which is where you hunt with hawks, falcons, or eagles.  I came across falconry while writing Half a World Away and decided to make it central to a whole book.  I’m also writing about the aftermath of WW II for a young Japanese American girl.

Cynthia Kadohata is the author of the Newbery Medal-winning novel Kira-Kira; the Jane Addams Peace Award and Pen USA Award winner Weedflower; Cracker! The Best Dog in Vietnam, winner of six state awards as voted on by children; Outside Beauty; A Million Shades of Gray; The Thing About Luck, winner of the National Book Award; Half a World Away; and three novels for grown-ups. She has published short stories in such literary journals as The New Yorker, Ploughshares, and Grand Street.  Kadohata lives with her son, boyfriend, and two possibly insane dogs in Los Angeles, California.

A video interview with Cynthia Kadohata on Kira Kira.

Cynthia reads from The Thing About Luck at the National Book Awards.

To learn more about Cynthia Kadohata, please visit her website.