I usually write about nonfiction conservation topics that empower children to act as global citizens. When Donna Rosenblum, Executive Director of Reason2Smile, approached me with an idea for a book about the importance of education, I saw another way to empower young readers to act.

Approximately 262 million children worldwide did not attend school in 2017. Neema’s Reason to Smile illustrator Mehrdokht Amini comes from Iran, a country where access to education is not necessarily a right. 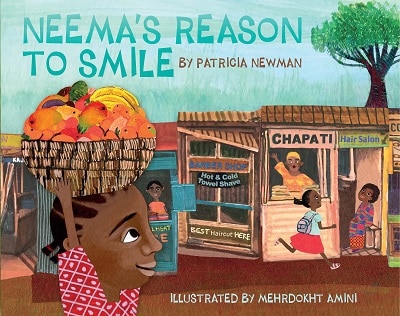 Donna and Mehrdokht know first-hand the challenges faced by children from extreme poverty or worn-torn countries. I thought you’d like to hear their messages from the front lines. END_OF_DOCUMENT_TOKEN_TO_BE_REPLACED

SO..what in the world is “On My Desk” anyway?

This series got started because, with my role as Project Manager, I get to enjoy the avalanche of amazing multicultural books for kids that are donated to our project.  A good chunk of the year my office looks like a small bookstore and I love every second of it.

Being appreciative of every book that crosses my desk, I wanted to find a fun way to share those books with the loyal folks who show up here to read every week and support this non-profit. In that moment, On My Desk | #ReadYourWorld Kidlit Books for 2019 was born! It’s my way of sharing some amazing titles that don’t always get the attention they deserve.

So even though MCBD2019 hasn’t occurred yet (1/25/19), I am LOVING all of the amazing books all these wonderful multicultural books for kids that I am discovering every time I open the mail.

Here’s what the Mailman Book Fairy brought me this week: END_OF_DOCUMENT_TOKEN_TO_BE_REPLACED

One of the best resources to explore the world of children’s literature with kids AND adults is none other than KidLit TV. Julie Gribble, a two Emmy Award nominee, a multi-award-winning writer, screenwriter, filmmaker, and producer, founded KidLit TV to help inspire children to learn and read. She has assembled an all-star team of diverse award-winning writers, illustrators, teachers, filmmakers, and reading specialists who work together to create fun new ways to reinforce an appreciation of reading that children will carry with them for the rest of their lives.

The diverse KidLit TV team also supports the We Need Diverse Books and Multicultural Children’s Book Day initiatives by encouraging the children’s literature community to create more books that reflect the diversity of our society.

KidLit TV is a winner of the Parents’ Choice Gold Award, the Norton Juster Award for Devotion to Literacy, and one of the American Library Association’s Great Websites For Kids. KLTV is available in over 600,000 schools worldwide via our website and video distribution partners. END_OF_DOCUMENT_TOKEN_TO_BE_REPLACED

Thank you to Annie Lynn and Walt Wilcezewski for donating their time and expertise to create our first official Read Your World Multicultural Children’s Book Day Music Video!!!

Special thanks to the kids for their vocals on this song:  Havana Chapman-Edwards, Will, Hailey, and Amanda!

Thank you to Matthew Winner who submitted photos of his students holding books covering their faces.

Thank you to everyone who contributed photos! END_OF_DOCUMENT_TOKEN_TO_BE_REPLACED

Guest post from Terri Birnbaum -co-founder of The RealGirls Revolution

Over the course of six years, and with the immense talent of many artists, and partnerships with some amazing organizations, a collection of illustrated girls became a 50-page coloring book we titled, RealGirls. Our story began when my daughter, Lydia, was eight, she and I were sewing clothes for her Barbies and had trouble making the dresses fit well on their tiny waists.

In frustration, I said, “Why don’t they just make real girls?” And with that, we began our long journey producing a book that celebrates girls’ unique and beautiful differences.

First, I reached out to community groups, student associations, art galleries, and college art programs, to meet with artists who were equally passionate about creating an alternative to the limited, and highly stereotyped, princesses and dolls that saturate our mainstream popular culture. Artists identified things they felt weren’t represented, and created girls that incorporated those qualities, or sketched friends or family members they felt embodied those qualities. They also used the opportunity to invest their artwork with visual messages addressing things that were important to them like, socioeconomic concerns, education, and cultural identity. One artist created a girl with a huge smile, understated clothing, and books in her arms, another created a girl wearing a traditional, culturally-specific scarf. These are just two examples of how artists chose to communicate pride in education and cultural identity. END_OF_DOCUMENT_TOKEN_TO_BE_REPLACED