When I was a librarian, I was determined to find the perfect book for even the most reluctant reader who stepped into my library. I believe J.K. Rowling was right when she said, “If you don’t like to read, you haven’t found the right book.” So that was my mission, but for some kids, I found the books weren’t there.

One young black girl wanted a picture book that had a black kid on the cover. A new one every week. That was easy . . . for a few weeks. There was a need for more. In fact, in 2012 only 7% of books published were about people of color.

This was on my mind when I started writing a chapter book series called the Adventures of the Bailey School Kids with a fellow teacher, Marcia Thornton Jones. When Vampires Don’t Wear Polka Dots, the first book in the series, came out with the fabulous dark-skinned Melody on the front I hoped my young student would be pleased. 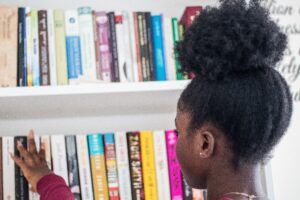 Matt del la Pena, whose Last Stop on Market Street won the Caldecott Honor, the Newbery Medal, and the Coretta Scott King Award, said, “I used to talk overtly about race and diversity in my novels.  Over the years, I‘ve decided that the new diversity I want to explore is writing about characters that are diverse, in stories that aren’t overtly about race.” New York librarian, Betsy Bird, calls this casual diversity-where diversity is just part of the everyday lives of the characters-not the sole focus of the story. This was what I’d always strived for as a writer.

But when Scholastic Graphix wanted to release Vampires Don’t Wear Polka Dots as a graphic novel with even more diverse characters I was a bit taken back. How could we change characters that I’d known for thirty years? It was a shock to see the formerly all-white characters of Principal Davis, Carey, Howie, and Liza change to different ethnicity. But I truly believe we are all the same inside, no matter what we look like on the outside, so I embraced the change. And I hope in some library somewhere a kid will be happy to see themselves on the cover of the Vampires Don’t Wear Polka Dots graphic novel.

Perhaps they will have even found the right book to make them lifelong readers.

Debbie Dadey is the author and co-author of 176 traditionally published books, including The Mermaid Tales and the best-selling Adventures of the Bailey School Kids. A former teacher and school librarian, Debbie enjoys sharing activities and teaching units on her website, debbiedadey.com. Connect with Debbie via Facebook, Twitter, Pinterest, and YouTube