Mike Mullin is the author of the Ashfall trilogy.

We are giving away 5 copies of his latest book, Surface Tension. Please fill out the Rafflecopter at the bottom to enter.

After witnessing an act of domestic terrorism while training on his bike, Jake is found near death, with a serious head injury and unable to remember the plane crash or the aftermath that landed him in the hospital. A terrorist leader’s teenage daughter, Betsy, is sent to kill Jake and eliminate him as a possible witness. When Jake’s mother blames his head injury for his tales of attempted murder, he has to rely on his girlfriend, Laurissa, to help him escape the killers and the law enforcement agents convinced that Jake himself had a role in the crash.

Mike Mullin, author of the Ashfall series, delivers a gripping story with memorable characters and all-too-real scenario. [young adult, ages 14 and up]

Okay, I’ll start with a confession. The title of this post isn’t exactly accurate. I’m an author, not a librarian, and certainly not qualified to write any kind of exhaustive list of the rich YA literature featuring Black protagonists.

Instead, I’m offering a more personal reading history. These are the books that I remember and still think about, sometimes years after I read them, the books that most influenced my development as a reader and writer. That also means this list includes some books that are arguably middle grade and one that was marketed as adult.

Although some of the books are classics, I’m including a few more recent titles this list because of the impact they had on my forthcoming novel, SURFACE TENSION. One of the most important characters in that novel is Laurissa Davis, a 17-year-old Black teenager from a wealthy family. Some books on this list she may have read, and others helped me define her character and her understanding of the world.

To the book list! (Read that sentence in Batman’s voice, please.)

1. Roll of Thunder, Hear My Cry by Mildred D. Taylor

I first read this novel the same year I first saw Star Wars, when I was ten or eleven. Both experiences linger in my memory nearly 40 years later. It wasn’t the first time I’d read books with Black protagonists (that would be Ezra Jack Keats’ brilliant picture books), but it was the first time I’d read about the brutality of racism. Roll of Thunder Hear My Cry is set in 1930’s Mississippi—Taylor sets the scene so well that by the time you’re done reading you’ll be able to taste the rust-colored dust of the dirt roads.

Cassie is an indomitable heroine. Every time I read her story, I alternate between feeling terror and elation as she confronts everything from racist insults to horrific threats against her person. But the true brilliance of the novel is the theme of fire running throughout it, beginning with the horribly burnt body of Mr. Berry and ending with a forest fire—it serves as a stark metaphor for the all-consuming nature of racism. [chapter book, ages 11 and up]

I think I loved this book because I identified so strongly with the protagonist: Mayo Cornelius Higgins, a brainy, disaffected young man who watches the world from atop a 40’ steel pole. Like M.C., I climbed everything in sight. (Trees, buildings… I never had a 40’ pole, but I have no doubt I would have tried to climb it. My favorite place was a tree covered in vines—I could climb up, stick my head out the top, and gaze over what looked like a leafy meadow suspended 60’ above the ground.) I also identified with the alliance M.C. builds with his neighbors, the light-skinned, red-headed Killburns. I never tried to build a wall with the Black kids who lived next door to me—Mark, Todd, and Glen—but we did build some wicked BMX ramps together! Years after I first read M.C. Higgins the Great, I met Virginia Hamilton and she signed a copy for me. I wish I’d bought a hardcover, but at that point I was in college and nearly broke. I also wish my handwriting were half as lovely as hers:

If you enjoy M.C. Higgins the Great, don’t miss The Planet of Junior Brown and The House of Dies Drear, my other favorite Hamilton novels. [chapter book, ages 11 and up]

I could have put lots of Myers books on this list, but this is the one that haunted my dreams for months after I read it. The protagonist, Steve, is facing 25-years to life for a crime he didn’t commit. Myers tells the story entirely through diary entries and a screenplay Steve is writing. But the real story here is Steve’s inner battle, as he struggles to reject the label society has already branded him with: Monster. [young adult, ages 13 and up]

5. One Crazy Summer by Rita Williams-Garcia

A funny and emotionally charged tale of three sisters who get caught up in the American civil rights movement and Black Panthers in Oakland in 1968. It won so many awards that they didn’t all fit on the original cover, and it had to be redesigned to accommodate the medals. By the time this one came out, I could afford hardcover books, and I love the inscription Williams-Garcia put in my signed copy, “Our character will lead us.” Good advice for both life and writing. [chapter book, ages 8 and up]

6. I Hadn’t Meant to Tell You This by Jacqueline Woodson

This one is firmly middle grade, but I’m including it here because it had such a huge influence on my forthcoming novel, SURFACE TENSION. It’s the first book I recall reading that flipped the usual script: Marie lives on the Black, prosperous side of town and Lena on the poor, White side. Marie’s father is a police officer and firmly middle class. Lena tells Marie a terrible secret, and Marie is faced with a difficult choice: Is it more important to keep a promise or to try to help her friend? I have lots of other favorite Jaqueline Woodson books: Locomotion, Brown Girl Dreaming, Hush, and After Tupac & D Foster are a few. She’s also a kind and generous person—she took time out of a party not long after my debut novel, ASHFALL, came out to give me some extremely useful advice. [young adult, ages 12 and up]

7. The Astonishing Life of Octavian Nothing, Traitor to the Nation by M.T. Anderson

Octavian is a slave raised by a very strange group of rational philosophers in the years leading up to the American Revolution. He lives a pampered life, studying the classics and natural philosophy. Eventually, he learns the secret of his confinement, and his world begins to fall apart. It’s told in first person, in the style of a journal, with language that feels right at home in the Revolutionary War setting. When Octavian’s life begins to fall to pieces, he scratches out chunks of his journal, and Anderson masterfully conveys almost as much heartache with these deletions as with the words that remain. [young adult, ages 14 and up]

Life is stacked against Precious Jones from the start. Everything imaginable goes wrong for her, yet somehow she perseveres. It’s raw, intense, and unforgettable reading. I occasionally teach a class on how to write the first line of a novel, and I always use this one, “I was left back when I was twelve because I had a baby for my father.” I also use the novel as an example of voice—Sapphire changes the language and spelling in Push to fit Precious’ development as she learns to read and write. It’s the sort of masterful writing that makes me hope someday I’ll be able to match it, even though I know I never will. [young adult, ages 14 and up]

9. The Hate U Give by Angie Thomas

You know about this one already, right? This is the seminal novel of the Black Lives Matter movement. For all the intense drama in the book, the scene that stuck in my mind was Starr and her family watching the Cavs game. I think I identified with them most strongly in that moment because it reminded me of watching college football with my own father.

I included this book on my list both for its obvious merit and because I had the privilege of attending several sessions given by Thomas and Becky Albertalli on writing diverse books at the Midwest Writers’ Workshop. Their advice was invaluable as I worked to incorporate the feedback of sensitivity readers during the final edits for SURFACE TENSION. [young adult, ages 14 and up]

This short novel is an intense examination of racism and police brutality in America today. Towards the end, every other chapter feels like a punch in the gut. I stopped several times as I read to process Justyce’s struggles. Sadly, it’s intensely realistic. Nearly all the numerous plot twists are fictionalizations of real and recent incidents. Justyce is an admirable and relatable character, struggling to find the right path in a world that’s stacked against him. [young adult, ages 14 and up]

Okay, I’ve got to end this somewhere. I’m looking over the pile of books I pulled off my shelves and I didn’t get to Tyrell by Coe Booth, Warriors Don’t Cry by Melba Pattillo Beals, Bud, Not Buddy by Christopher Paul Curtis, Ghost by Jason Reynolds and many others. Maybe we’ll do this again some time.

We are giving away 5 copies of his latest book, Surface Tension. Please fill out the Rafflecopter below to enter. We can only mail to U.S. addresses. 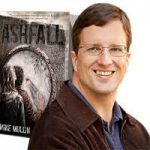 Mike Mullin is the author of the ASHFALL trilogy. His forthcoming book, SURFACE TENSION, is about Jake, Laurissa, and Betsy, three teenagers whose paths cross unexpectedly in the aftermath of a terrorist attack. It will be released on May 8th, 2018. More information on his website, Facebook and Twitter. 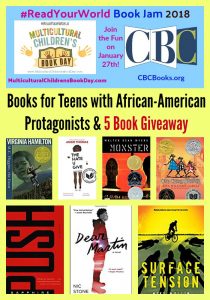