Author, writer and long-time Texan, Max Oliver grew up in a North Texas area the Comanche called “Eagle Flats.” Being influenced by the life and beliefs of the early Comanche tribes, Max felt compelled to research the daily habits of the Numuu (the People) and use that knowledge to create his signature line of Comanche-Inspired Books and Poetry.

Max says that there is always an inner part of him that loves the ways of the People. He is an avid reader of any work about the Native Americans. His writing is influenced by many conversations with, books about, and first-hand accounts of the ways of living and warring among those who lived on the land before they were forced onto reservations by the European newcomers.

Using the information gleaned from his research, personal conversations and experiences, Max has written many Comanche-inspired books including The Saga of a Comanche Warrior series which includes five books; Little Boy (2012), No More (2012), Tomo Pui (Sky Eyes)(2012), Red Nose and Chief Red Nose (2009). He has also used this knowledge to create a multicultural children’s book called Little Dancer Learns (2014); a sweet story of a young Comanche girl who wants to learn how to dance more than anything, but first has to learn about her responsibilities.

As a prolific and thought-provoking author, Max’s hope is that his readers will not only gain a better understanding of the Comanche tribe life, but also of the victories and struggles of “roughnecks” during the “oil patch days” through his Western Fiction, Native American Fiction and Multicultural Children’s books.

During Multicultural Children’s Book Day Max’s YA book Little Boy was reviewed by several of our book reviewers. Bernice Rocque created an in-depth review of this book along with some great discussion activities. Read the full review here. 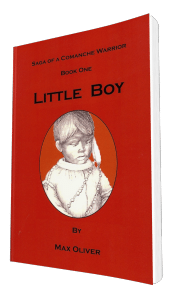 This series tells the story of a young Comanche who, being the smaller and weaker twin at birth, is able to use both his physical and mental acumen to achieve greatness. His adventures take him throughout 1800’s Comancheria and into the Apache and Mexican lands as well. His few encounters with Europeans are rarely pleasant for either party. Oliver demonstrates that living off the land is both dangerous and exciting and takes great wisdom to be successful. Max Oliver was raised in Comanche Country. His grandmother was of the Comanche Tribe. He grew up in Texas, Oklahoma and Kansas, reading and learning from the Native Americans living in those areas. 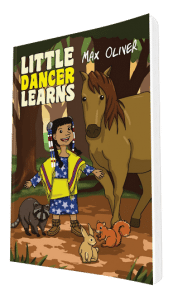 Little Dancer is about a young Comanche girl, who longs to learn to dance so that she can dance with the adults and express her own feelings. She must learn many things to be a Comanche Woman and does, all the time working on the dances. She is taught and helped by her mother, sister, friends and all the members of the tribe.

When she reaches her eighth birthday she is finally allowed to dance at the annual pow-wow. It is called her “first out.” Meaning the first time she has danced “out” in public and is the sign that she is maturing as a young woman. Grab your copy of Little Dancer Learns here.

Max: Q After so many years of trying to put a tail on it neatly, I discovered that  I could do it all in one fluid motion that looked good.

Question 2: What do you want readers to know about your latest book?

Max: That God told us and is telling us so many times how to live.

Question 3: As an author, how do you know when you have discovered an idea
for your next book?

Max: Usually a phrase, name, verse to a song or other saying strikes me as something I want to write about.

Question 4: What was the catalyst for creating your latest book?

Max: Discovering how many times God used the title “It is Written” in scripture.

Question 5: What’s next? What projects/books/events do you have in the
works that you would like to share?

Max: No Woman’s Land” is about a Texas Ranger who goes under cover to catch the most famous outlaw of the day and meets Belle Starr and other savory characters that affect the way he judges others.

Sign up – Find out about all of MCCBD’s author visits, event news and book giveaways!