We are so excited and honored to have author Maria E Andreu stop by for a visit. Maria’s book The Secret Side of Empty was named among School Library Journal’s Top 10 Latino Books of 2014!

I have a soft spot in my heart for the letter Z.  Both my kids have “Z” names, one of them middle, one of them first.  There’s something melodic and dramatic and gorgeous about Z, the letter of Zhivago and zest.  I like the attitude of Z.

My book has gotten a lot of buzz as a multicultural book, which is awesome, but what I’d most like readers to know is that it’s a story about finding your place in the world.  She’s undocumented, but her struggles to belong are ones that almost anyone can relate to.  Also, there’s a love story that starts with a slow speed chase!  So there are fun moments in the midst of serious issues. 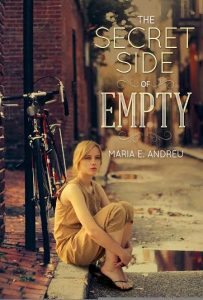 It’s an excitement, a tingle.  I remember a writing teacher once telling me that in order to commit to a book you had to be okay with the idea of doing nothing but thinking about it and talking about it for the next five years.  It’s a high bar, but it’s worth thinking about.  Do I love this story enough to work on it and promote it until I am bored to death of it?  The excitement has to carry you past all the hard work that is involved in writing a book.

THE SECRET SIDE OF EMPTY is about a high school senior who is undocumented and all the pressures and issues she faces as a result of her immigration status.  Like the main character, I too was undocumented.  That was the original inspiration.  Later, the story became all about her and her unique struggle and it was a lot of fun to watch the character come to life.  But the catalyst for it came from my own experiences.

I have a hard time working on just one project so I have several floating around.  One is the story of Quinn, a character in THE SECRET SIDE OF EMPTY.  That one’s finished.  I also have two more in various stages of completion.  I have a list of 11 story ideas that I’ve taped up next to my bed so that they’re the first thing I see every morning.  So much to write, so little time!