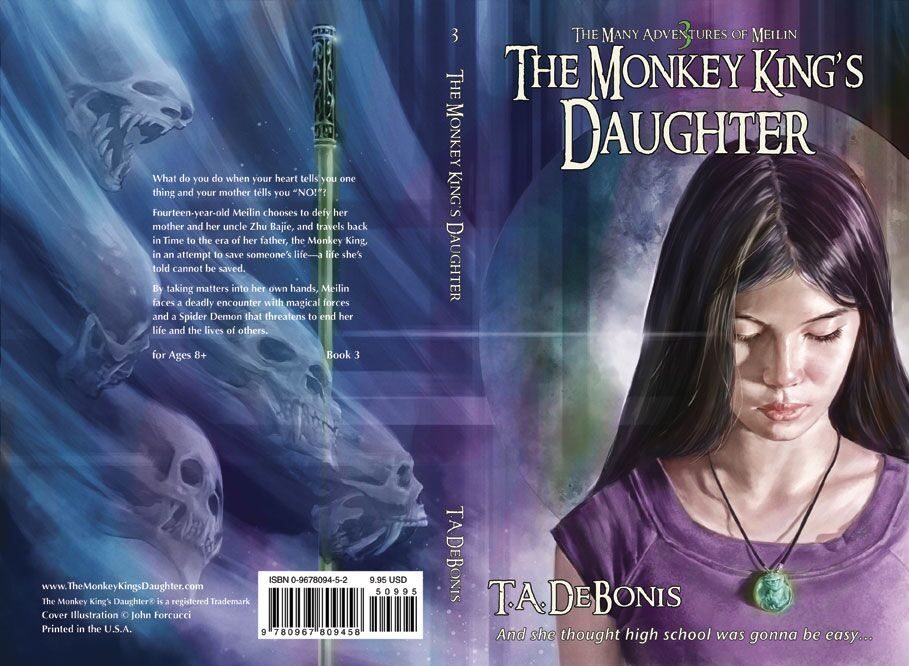 The Monkey King’s Daughter® is all about empowerment through the realization of self-worth, deed and valor. It’s Meilin’s journey of personal growth, amid the trials of extraordinary circumstance and adversity, that drives each adventure.

A conversation with The Monkey King’s Daughter author Todd DeBonis.

MCCBD: Where did the idea for The Monkey King’s Daughter come from?

Todd: It came out of helping my oldest daughter with an ELL assignment when she first began to learn English (my wife is Vietnamese, we met while I was working over there.) My daughter needed to write a short 1-page story with her new vocab words—she needed help—couldn’t think of a story—so I asked her what stories from Vietnam she might know. She couldn’t think of any. I mentioned that one of my favorite stories growing up was, The Monkey King—and suggested “what if” a girl like you was maybe—the Monkey King’s daughter, going to school here in America—what might your day be like?” And so, TMKD was born. When I finally got around to writing the first full book for her, it was so well received, that I decided to continue the series– and here we are today with 4-books and still going…

MCCBD:Who are the books for?

Todd: Middle readers ages 7 to 12. Or anyone really. Adults love them, as well. I have 6 children (4 girls), so, there is no funny business or inappropriate stuff in these books. Parents can rely on that.

MCCBD: Is TMKD for boys? Girls? Everyone?

Todd: Everyone. It’s a story about a girl, so girls readily identify with it. However, there is enough kung fu, magic, demon fighting, etc., to keep any boy satisfied.

MCCBD: Is TMKD a coming of age story?

Todd: Very much so. The central character, Meilin, learns something new in each adventure—especially about herself. The stories are also “conversations” about relevant issues between me and my actual daughters. If I have any voice in it, it’s as Meilin’s guardian, Uncle Z, aka Pigsy the Pig (a big fat demon pig.) The Monkey King himself never appears in any TMKD story, except Book #1—and only at the end.  This is because The Monkey King is such a major legend, that I’d never presume to alter it in any way. TMKD is about what happens a few thousand years later…

MCCBD: So there is Time Travel involved?

Todd: Yes. Meilin must often confront some ancient deity or demon who is making trouble, whether in the Present or in the Past.

MCCBD: The series has been likened to Percy Jackson–Asian -style…

Todd: A kind compliment to be placed in that category. It’s also been called the “Asian” Buffy— another very kind complement.

MCCBD: If TMKD could be described in one word…

Todd: That’s easy. EMPOWERMENT. Empowering kids to believe in themselves, finding their inner courage, and stepping up to the plate to do what’s right. I guess that’s more than one word…

MCCBD: So, what’s next for TMKD?

Todd: We are very pleased to announce that The Monkey King’s Daughter® The Movie is now an official Chinese co-production slated to shoot in 2016 in China and Canada. Financier Lü Jianmin’s Beijing-based Chunqiu Time Culture Company is collaborating with ANA Media’s Scott Einbinder to back the film.

Roman Kopelevich’s Red Sea Media is handling international sales for the film and will introduce it to buyers in Cannes. “China is the second biggest film market in the world. I’m proud and excited to be selling this magnificent, Chinese origin, young-adult movie which transcends genres and cultures,” said Kopelevich.

This series is also perfect vehicle for TV. Something like Disney- or any family-oriented programmer—but those folks are near impossible to reach. The movie/TV biz is a tough nut to crack. It takes industry connections and people who will champion your cause. I’ve made those connections overseas—I still need to make those connections here.

What I like about the TV aspect of TMKD (for the US market and audience) is that it’s a perfect vehicle for Asian and Asian American actors and actresses to finally get the leading roles they deserve in an episodic program that will be welcomed in any home across the board (and I’m not talking about a “Fresh off the boat” sitcom with stereotype jokes). TMKD a perfect blend of East and West culture wrapped up in adventure that kids & family will truly enjoy (and learn from.) Something, IMHO, long overdue in this country.

MCCBD: And in the meantime?

Todd: The book series continues, no matter how the film & TV efforts progress. I intend to pen a 10-book series and then some. I’m already spinning out one of the characters in TMKD for a series of books of her own—The Huli-Jing (about a fox-demon).  It will be a of fun.

MCCBD: Tell us about the other aspect of TMKD; Charities….

Todd: Yes– I wrote the original Monkey King’s Daughter for my oldest daughter. It is my gift to her. All books talk about compassion and helping others. So, as an author and a father–what does this mean to me? —It means stepping up to the plate and acting on the very concepts I incorporate into the adventures. That’s why I am pleased to associate my books with any charitable organization, foundation, corporation, orphanage, adoption agency, hospital—that directly raises money to help children in need. If my books can help raise even one penny to help a child—I’ll be there. It’s my way of giving back.  So, I’m always open to hearing from people along those lines.

I’m already been very fortunate to be help some great organizations like China Care, who help orphans and children needing life altering surgeries. China Adoption with Love, Inc— who help orphans in so many ways, as well as adoptive families, etc.

Everyone has a gift — something (whether they’ve come to realize it or not) that they can give back.  For me, it’s my books—and if The Money King’s Daughter helps just one child—then it’s all worth it.

MCCBD: If you were to let parents, teachers and librarians know ONE THING about the MKD series —what would that one thing be?

Todd: That the books are “safe”. They offer positive messages hidden in each adventure that kids can learn from. Self-empowerment, Compassion, Humility, Forgiveness, resolving conflicts without violence, Loyalty, Friendship—but most of all, believing in yourself. Meilin makes mistakes in every story—big ones—but she learns from them, and grows into her powers and responsibilities as The Monkey King’s Daughter and as a person.  That’s what TMKD brings to the table.

MCCBD: Anything else to add?

Todd: Yes. I am the author of TMKD—but it takes more than that to make it work. I am very fortunate have two wonderful friends who act as my editors (Monty & Laurie Haas, authors of Read it Aloud! A guide to Parenting with Children’s Books) who keep me on track and on message— a friend and brilliant artist, John Forcucci, who does the stunning cover art for the books—and my wife, Lien—who allows me pursue my crazy ambition to write in between the wonderful chaos of raising our family. And now veteran film and television star, Aki Aleong, has joined the TMKD family as executive producer of the film version being produced in China. It’s very much a family/team effort to make this all happen — everyone bringing an expertise to the table in areas I don’t have. Life is a journey. You meet some great and good people along the way. If you’re lucky, they become your close friends. And that’s the way it should be.

MCCBD: THANK YOU so much for these insightful facts and thoughts, Todd. Thank you also for providing a complete set of The Monkey King’s Daughter to give away to one lucky winner! 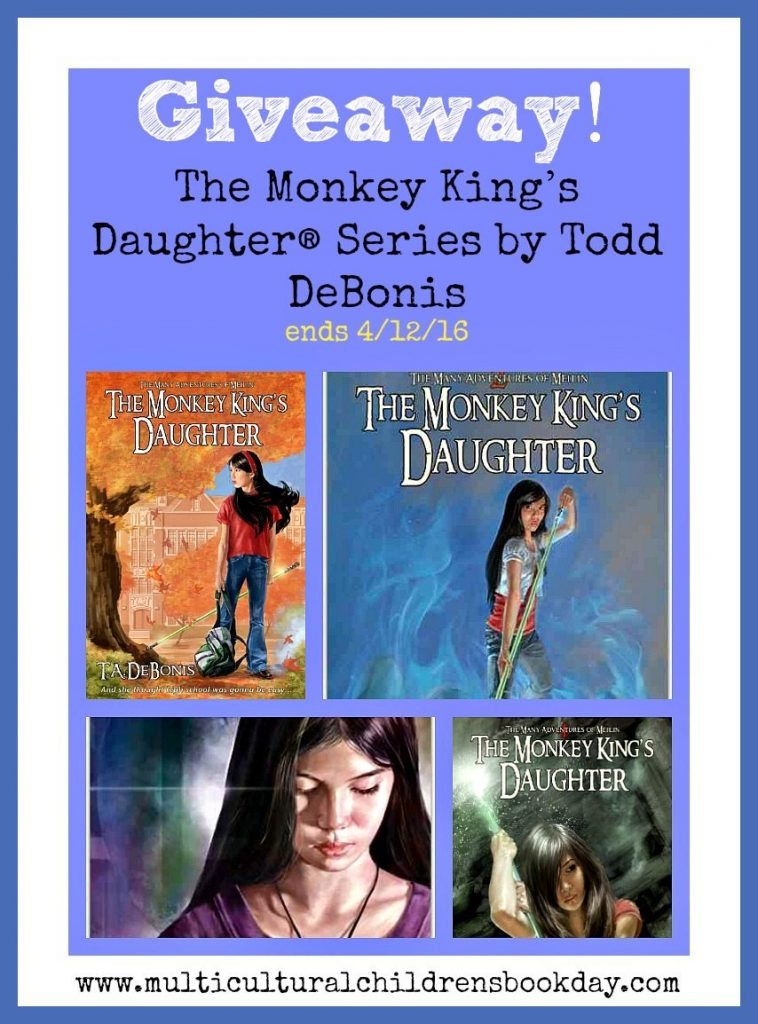 ONE winner will receive a 4 book set of The Monkey King’s Daughter by Todd DeBonis. Giveaway begins April 5th and ends April 12, 2016.

Stay in the loop on all of the updates, giveaways, contests and authors visits surrounding Multicultural Children’s Book Day! Sign up for our free newsletter here!